Just half of this game's content is alone worthy of a buy, but the whole package makes UT2004 into a gaming-god-behemoth, offering enough action, depth, and expansion possibilities (just think of the mods that are going to come!!), to justify keeping UT2.

Scientists create Unreal Tournament-playing A.I that is indistinguishable from humans

Scientists at Austin University of Texas have created artificial intelligence that fooled a panel of judged into thinking it was human. 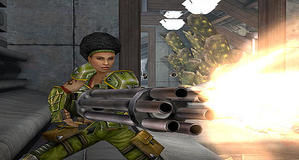