Molyneux: No moral judgement, but consequences in GODUS 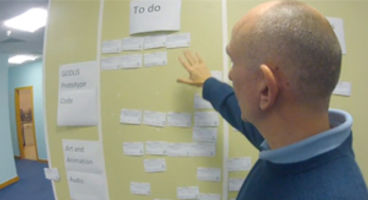 22cans and Peter Molyneux have a God complex, and they're happy to help us get one too. GODUS is Molyneux's latest crack at spreading divinity and he wants to feel "unbelievable prowess."

Right now the studio is still mulling over how the player will be represented in the game, as Black & White's God hand "didn't work terribly well." They may go for something "more abstract."

The powers we'll be wielding are designed to feel tactile in a "reactive world," and representing us as an avatar in-game (think Populous) would make the player less than divine.

“I want it to feel like it’s your hand—the hand that’s on the mouse or the touchscreen—that’s touching this tactile and reactive world, and making you an avatar in the world is something that can demote that.”

In Populous 3: The Beginning we played as a Shaman that by the end ascended to Godhood, which removed us from the game but allowed us to use our powers anywhere with little restriction. GODUS would employ a more Black & White approach to followers, where emphasis was on using powers and planning expansion. It goes a number of steps further though as we won't be directly controlling our people, but instead guide them through sculpting the land.

The problem for 22cans is how best to have us represented in GODUS.

"So, it may be that we end up with a hand like in Black & White, which I think didn’t work terribly well,” admitted Molyneux. “We might make it more abstract. It’s all about you feeling like you’re presiding over this world, that there are these little worshipers that adore you, yes, and also a sense of powerful responsibility towards them.”

We won't have to be all love and rainbows with our people - cruelty 'isn't punished'.

"Whenever I play something like SimCity, I let out the dinosaurs and stuff—I’d destroy everything that took me hours and hours to create, but that is one of the core tenets of a god game. If you want to do it, fine. What am I to tell you what to do? I don’t want to be your judge, but I want there to be consequences.”

The idea is that we'll start out ridiculously small in size with our civilization but, through nurturing, we can see our people grow and grow. From a small speck of a settlement we can watch them expand into a village, then a town and finally achieve a metropolis that not only builds out but up.

"At the start, everyone’s games will start with very few of these followers and there will be these tiny little settlements. Just one or two buildings. Too small to even be called villages," described Molyneux. "Then, with your ability to adapt the land around them, they’ll slowly spread out. Those settlements will turn into villages and those villages will turn into towns. From there, the towns will be become cities and metropolises."

We'll also be seeing our people advance technologically: "I’d like to stop around the time when gunpowder came about and things became more complicated. It’s a fascinating part of history, really. When cannons were introduced in Europe, 400 castles were, in one year, destroyed by cannon fire. That was because, before then, the way wars used to work was: if someone were to start attacking, you’d run away into a castle and just start laughing."

GODUS doesn't follow any strict path, he added: "We’re not modeling GODUS on any particular kind of pantheon. I wanted to make it more of a mixture of things. After all, our interpretation of religion has always been a mixture. If you look at the Greek gods and how they turned into the Roman gods and how that went on to influence modern-day Judeo-Christian beliefs, you’ll see that a lot of religions are a mixture of different legends and mythologies.”

Check out the full interview between Peter Molyneux and PC Gamer. The Project GODUS Kickstarter campaign still has 9 days to go in hope of reaching £450k, with over 9,000 backers pledging almost £255k so far. 22cans is 'desperate' to get work finished on a playable prototype of the game out this month to encourage more pledges.