Relic "doing some rethinking" about Warhammer 40K: Dawn of War 3 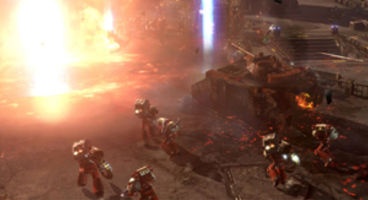 Developer Relic is working on Company of Heroes 2, which means there's little time for a full production of the next Warhammer 40K: Dawn of War instalment, but that's okay.

The studio are "doing some rethinking" about how they approach RTS; what's the "best way to present" the strategy genre? There'll definitely be more "RTS 40k stuff," says Danny Bilson.

An announcement for Dawn of War 3 never turned up but THQ and Relic had switched focus to Company of Heroes 2 instead. They'll be returning to Space Marines.

"There's a lot of rethinking going on right now with the RTS 40k stuff. We're going to do something different, but we're in a bit of a rethinking mode," explained Bilson, speaking to Eurogamer.

"But look, everybody at Relic loves 40k. I love 40k. I also have tremendous respect for Games Workshop and the people I work with there. They're some of the best people I've ever worked with in my career. So I personally feel really strongly about that brand." Dawn of War 2 stepped away from the traditional base building mechanic of the original for its single player campaign, but retained it for online matches.

"There are aspects of Company of Heroes we haven't talked about that are progressive and forward thinking, that we'll roll out between now and the launch of the game. We're just giving you the first look at Company of Heroes 2. There's actually more to it." Let's hope E3 next week drowns us in Relic RTS goodness.