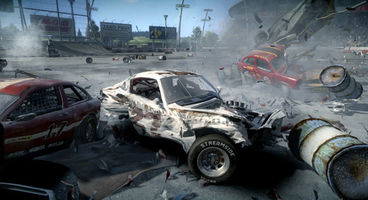 Next Car Game is a all about "demolition racing" with "spectacular crashes, realistic driving physics and intense car building" from the studio that gave us FlatOut.

"Over the years, we’ve been thinking about going back to our roots, and creating another high-octane racing game that would capture the spirit of over-the-top action and reckless racing as the legendary games of the past. For years, both Destruction Derby and FlatOut fans have been screaming for a comeback."

"If you’re familiar with the original FlatOut experience, you already know what we’re aiming at, only this time we’re upping the ante on almost every front. It’s all about the stuff that really matters: cool cars, varied tracks and the signature once-in-the-lifetime moments that can be achieved only with true-to-life physics simulation."

Check out the Next Car Game Kickstarter to learn more.