Paradox: Crusader Kings 2 has "2 more years of expansions" in the works 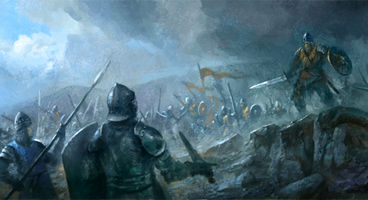 All that family drama in Crusader Kings 2 has proven quite the surprise hit for Paradox Interactive as their latest expansion The Old Gods "breaks all records," declared studio manager John Anderson

Already five add-on expansions have been released for the crusading sequel, but "2 more years of expansions" will go down rather well with the CK2 community. Long live the King!

The Old Gods significantly beefed up the pagan-aligned factions within Crusader Kings 2, granting them exclusive events and increasing their threat to Christendom.

"@CrusaderKings keeps doing better and better," tweeted Andersson. "Old Gods breaks all records! And we just finished plans for 2 more years of expansions." Two more years of back-stabbing royals and placating Popes? Paradox is known for introducing or refining game mechanics with these add-ons, so who knows what it'll be like in 2 years?

Crusader Kings 2: The Old Gods is available now via the usual suspects like Steam.