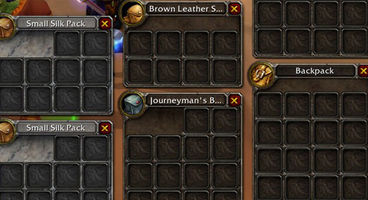 Inventory full there, adventurer? It's a plague that's stalked loot hoarders ever since the backpack was digitised. Now Blizzard intend to increase inventory space with the new Warlords of Draenor expansion.

Blizzard are tinkering with "slightly longer term plans" to do with a gear collection feature, and are letting people craft from banks. More quest items going into the log.

While the proposed account-wide toy and heirloom system unveiled at BlizzCon will clear a lot of space for some, other solutions are needed to sweep away the clutter.

At launch the latest World of Warcraft expansion will be letting us strap larger backpacks to our mighty loot hauling spines, although this is a "bandaid-y" route to take for now, admits Blizzard's community manager Bashiok. However they have some long-term plans in mind for sorting out our gear collections, which should help us track set collections easier.

"Even bandaid fixes for storage issues (ie more void storage) take time to develop and implement, so we'd prefer to spend that time working on solutions, like systems that hold your items and gear in new ways that don't actually use inventory slots," Bashiok posted on the Battle.net forums.

"We announced the account-wide toy and heirloom systems at BlizzCon, as well as the ability to craft from your bank and bigger stack sizes for some items, and we've hinted at some slightly longer term plans for a gear collection/wardrobe feature that would help serve all the transmoggers out there in not just freeing up space but also providing the ability to easily track set collections - all of which will help in their own way with inventory management," they explained.

"While the toy and heirloom systems are planned for the launch of Warlords, the gear collection system will be a bit later."

"We expect the toy and heirloom systems will free up enough space for most people, as well as some (albeit bandaid-y) slightly larger bags in Warlords and attaching quest items to the quest log instead of as items to fill up your bags, will all help in the meantime," Bahiok continued.

World of Warcraft: Warlords of Draenor adds the new world of Draenor to explore, a player-owned garrison base, new character models, a raised level cap of 100 and the ability to get one boosted level 90 character per account.