The Elder Scrolls: Online hasn't been considered a game without substance for quite some time now. Rejunevating itself from a rocky launch, it's one of the more popular MMOs on the market and one that keeps a certain playerbase from complaining about a lack of The Elder Scrolls VI.

In just under two weeks time (assuming you're a PC player) you'll be able to fend off the Minotaur yet again in the latest DLC add-on pack- Horns of the Reach. 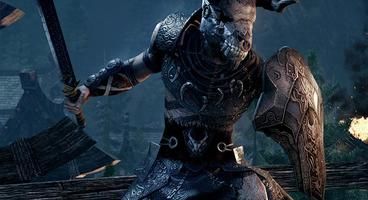 This isn't your typical massive expansion to Tamriel, though. We just had that with the Morrowind expansion. This is a stand-alone DLC pack that'll cost 1500 'crowns' - ESO's microtransaction currency - or around £11.99 for those in need of a few. The good news, however, is that anyone who still pays for a recurring ESO Plus membership will get this one for free. It's like a free month, almost.

The Elder Scrolls Online Expands Into Vvardenfel - 700 Years Before Morrowind

The pack itself simply contains two new 4-player dungeons for you to explore, fight through, and conquer. Falkreath Hold has you holding back a Minotaur invasion following their siding with the Reachmen. Falkreath's defences have buckled, and your squad are the only wall stopping the Minotaurs from capturing the fortress.The damning Bloodroot Forge dungeon paints a similar picture. Having discovered the Forge's ability to grant unimaginable primal strength to those who hold it, you can bet the Minotaur/Reachmen army are in there hoping to score the goods. We can imagine you'll be facing off against some powerful brutes in here.

The 'Horns of the Reach' add-on pack officially launches August 14, with consoles coming toward the end of the month.. New achievements, item and monster sets are up for grabs through the content's Normal, Veteran and Veteran Hard Mode variants.