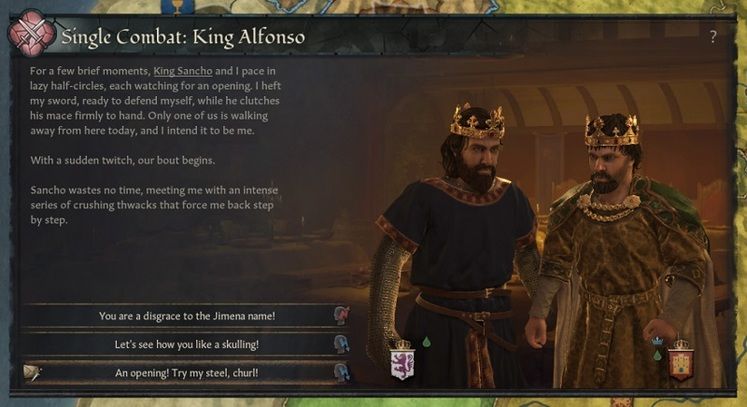 Crusader Kings 3's characters often settle matters by telling their countrymen to hit each other with big and pointy sticks until one side grows tired or runs out of opponents. But not every disagreement has to end in war, rulers sometimes choosing an honorable duel instead. If you're an adept of the latter approach, Update 1.3 has some welcome improvements in store for you.

The dueling changes planned for CK3's Update 1.3 aim to make these engagements a bit more elaborate while giving players a higher amount of control over their characters' actions. Traits, relationships, and other factors weigh in on how well a character performs. Knowledge of how the game works is also rewarded but "a newbie just guessing should still have a fair chance of success," according to Paradox. 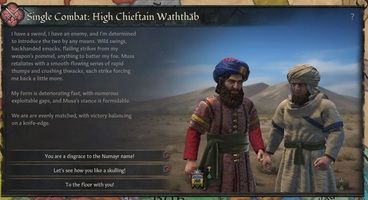 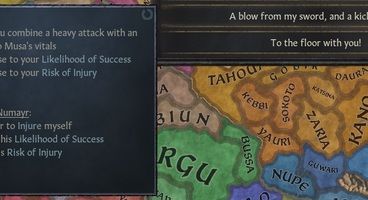 Duels always feature two characters and stretch across between two and four rounds of combat. During each round, players get to choose one of several actions for their character to perform, weighing the potential outcome of each before committing to it.

The higher a character's Prowess skill, the more likely they are to draw good combat moves. A character with a low Prowess skill will, on average, draw worse moves, but that doesn't mean they can't emerge victorious.

"Instead of one of your regular combat moves, you may also draw a special move. Rather than being based on just your prowess skill, these take into account traits, location, special relationships between you and your opponent, all manner of things. They range from giving a demoralising speech to your opponent to using your skill as a raider to make an example of them as you fight," the developer explains in a recent post.

Each combat move can change your Likelihood of Success and Risk of Injury by various amounts. The goal, once Update 1.3 lands, is to increase the former as much as possible while keeping the latter as low as you can. The Duel Edge system also grants temporary bonuses or maluses that further impact how battles play out.

The post linked above also exemplifies how a character with a lower Prowess stat can defeat an opponent, as well as how taking risks during a duel can pay off. Crusader Kings 3's Update 1.3 doesn't yet have a release date, but will also introduce winter alongside a series of changes to the game's map when it launches.