Will Age of Empires 4 take the crown? 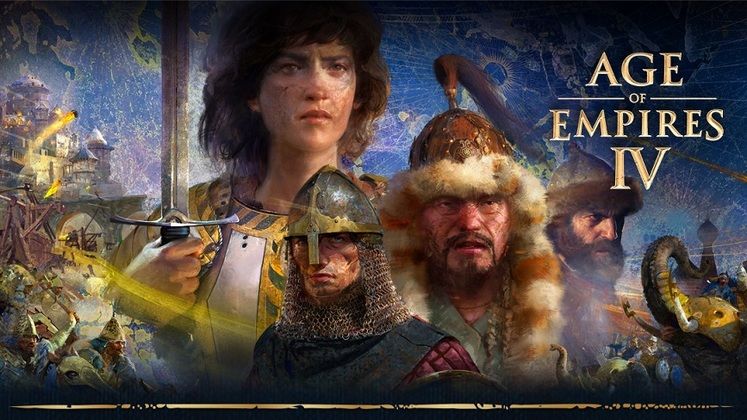 Age of Empires 4 is the latest attempt at continuing the epic franchise that started so many years ago when game patches still came with magazines. Age of Empires 2 is still a surprisingly popular competitive title, surpassing its successor in concurrent players on Steam.

So, is Age of Empires 4 going to knock down the walls and take the crown? Let’s take a look and see just what there is to offer in this instalment. 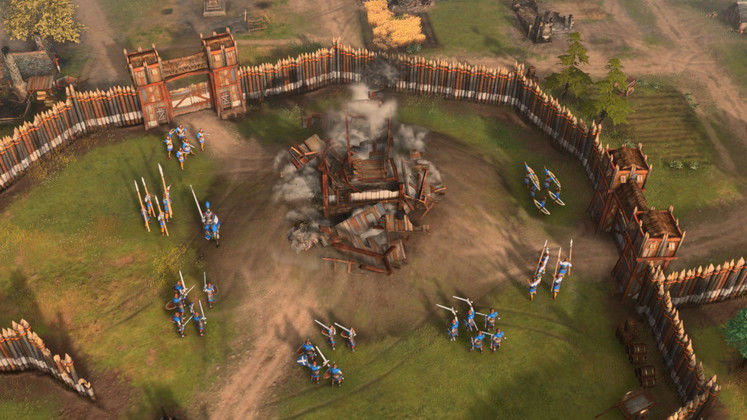 The point of each match is simple - build up your army and destroy your opponents’ bases - but this simplicity belies the depth of Age of Empires 4, which balances a complex game of rock paper scissors with limited resources and massive armies. 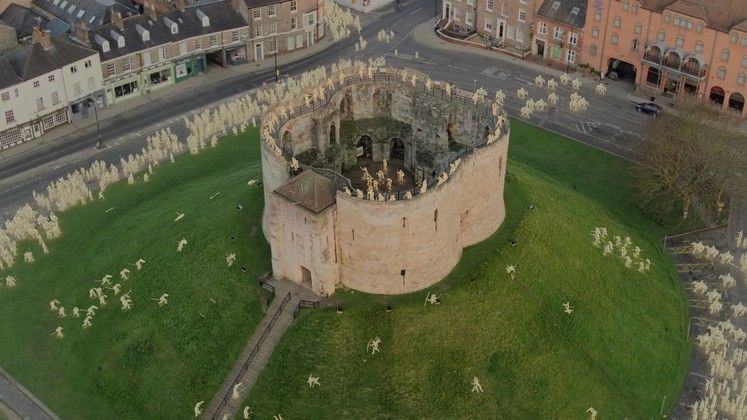 There are a total of four, single-player campaigns available based on historical events. The Norman campaign begins in 1066 and tells the story of multiple kings as they fight to maintain the throne across the ages. The others are The Hundred Years War, the Mongol invasion of Russia, and the Rise of Moscow following the devastation left behind in the Mongol wake.

These campaigns are complete with scene-setting that looks an awful lot like a BBC history documentary, but by no means is this a bad thing, with some nice visuals and just enough information to not overwhelm nonhistory fans.

In addition to the campaigns, there is also a highly customisable skirmish mode, with tons of maps, region-specific terrain, and map seeds allowing you to share your favourites with friends. 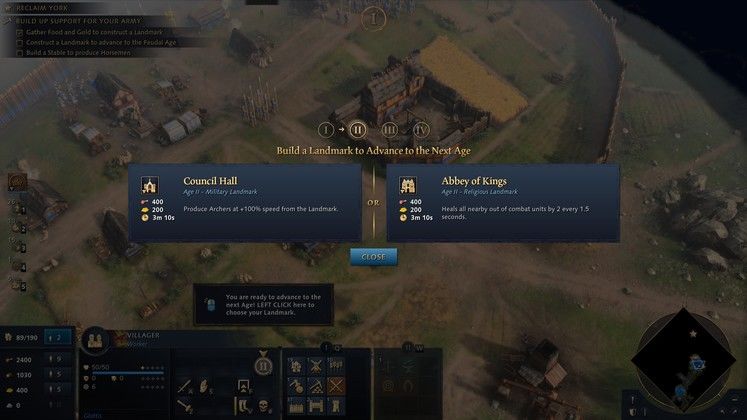 Following a standard formula isn’t all bad, especially when it was perfected many years ago. The Age of Empires mechanics are simple and direct, letting anyone familiar with the franchise jump right in.

You start with your town centre and a handful of villagers and immediately set up the basics of survival. This means getting your peasants to chop wood and gather food while your scout rushes around the map seeking gold, stone, and all the sheep he can find.

Using these resources, you’ll find yourself expanding as quickly as possible - the more, the better, as rushing is the name of the game. Despite this gold rush, you can’t neglect your army, and building a defensive force that will eventually be on the attack is paramount.

You can also build walls and towers, making Age of Empires 4 a simplistic castle simulator that works well with the fast-paced gameplay.

As your civilisation moves forward, you’ll advance between the ages, building monuments that grant one of two faction-specific bonuses and unlocking better quality units along with a shiny new aesthetic for all your buildings. One particularly welcome feature is that upgrades apply to all units on the field, ensuring you don’t end up with out-of-date soldiers spoiling things.

The main goal of the battles will be to conquer and destroy your enemies, although there can be other objectives such as building and defending a Wonder or holding every Holy Site on the map.

If you haven’t played Age of Empires before, be prepared for a constant demand for clicking, scrolling, and otherwise keeping an eye on the ball at all times. It isn’t a game that holds your hand, and if you don’t pay attention, you suffer for it. 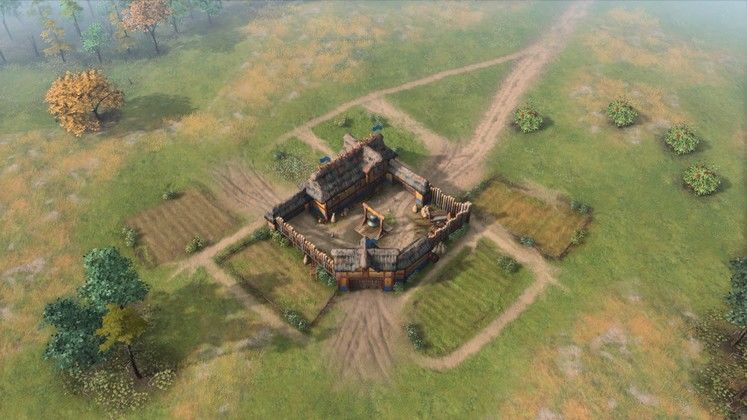 The visuals come in a few different flavours, with the art design being excellent throughout. The documentary films use a combination of modern-day footage with computer-generated armies that helps ground the facts in reality.

The battle maps are well put together, with the terrain being easy to read. The structures also expand outside of their boxes to change the surrounding areas. It can be seen right from the start, with your town centre having little fields and paths branching out around it, making for a nice touch.

While still good, the only real letdown was the units themselves. There is nothing wrong with them at all, but compared to the fidelity of the terrain, they appear a little cartoony. Of course, this is the new style of Age of Empires and does work well, but it comes down to personal taste and franchise veterans may not feel at home.

The audio is good across the board, with satisfying UI and gameplay sounds that are easy to identify. With the fast pace of tactics, this is important when you’ll find yourself quickly switching between units and buildings, or by being alerted to an incoming attack.

The background music is also pleasant, fitting in with the theme but not distracting or noticeably repetitive. Overall, there’s nothing to complain about here. 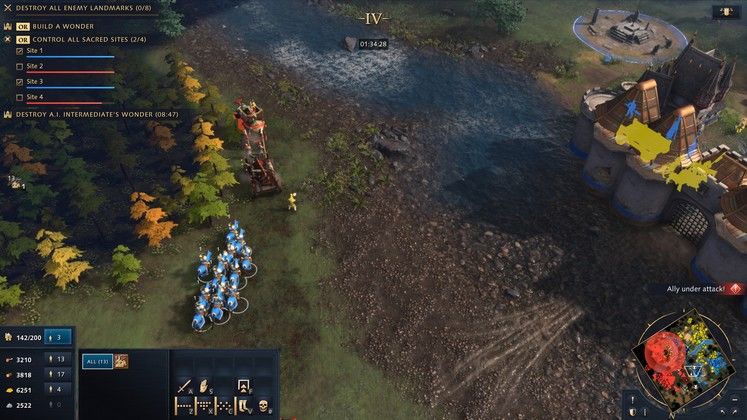 The AI feels better than Age of Empires 3, although it will still send small pointless waves of attackers throughout a match. But, it’s not all dumb and is capable of launching huge attacks with large numbers of siege engines when dealing with an entrenched player.

With that said, it’s still an RTS AI, meaning that the standard tactics employed will be to collect resources, build units as fast as possible, then send them for a frontal attack against the player.

It does, however, use scouts and cavalry quite well, sending groups of cavalry to harass your sides and scouts to attack your peasants, even if they have to trek around half the map to do it. While it can be frustrating to deal with, it adds to the challenge and is a believable tactic.

Unfortunately, the AI doesn’t seem to understand choke points and tends to build sporadic walls around their bases, albeit with lots of towers that can whittle down attacking armies quite well. 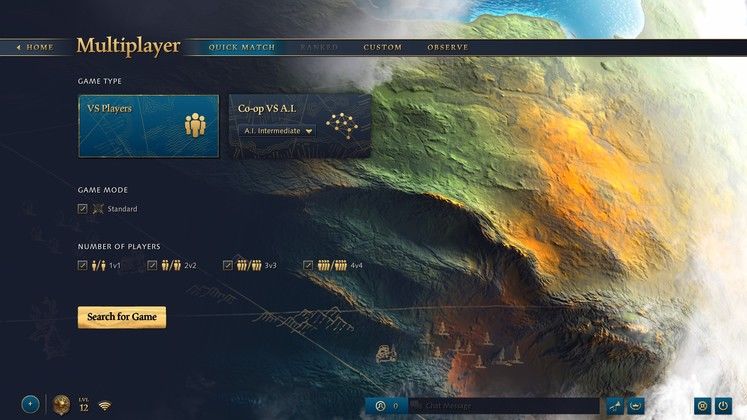 The game isn’t just you Vs. the AI, and we can see a bright future for competitive online battles. There is a lobby for finding opponents, filtered by whatever type of battle you want to play, and also includes a cooperative option if you would like to play alongside a friend. 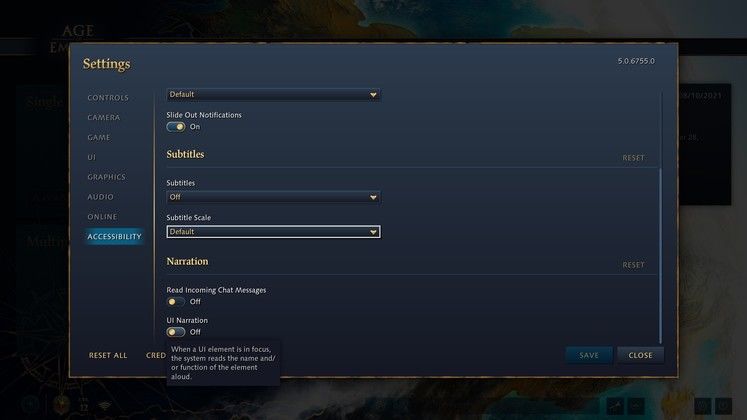 The developers behind Age of Empires 4 have given a lot of attention to the accessibility of Age of Empires 4, with a high contrast mode available along with speech options for the UI and incoming chat messages.

Performance isn’t bad at all, though the loading times can be longer than you may like, even on an SSD. Once in the game, however, everything ran smoothly with no crashes or lag of any kind. It’s a very stable game, which is probably down to Relic Entertainment’s Essence Engine.

The one issue we encountered was the complete lack of unit health bars, creating an issue for micromanaging in combat. A second machine displayed these correctly, so we can safely assume this is down to hardware differences. These will probably be resolved in the main release.

Running a cavalry charge around the enemy defenses to burn their Wonder to the ground while the clock ticked down to defeat. No horses survived, but victory was mine.

Age of Empires 4 does a lot well, building from the roots of the AoE franchise. Fans of the original games will find the improved graphics to be welcome and the gameplay to maintain the same fast-paced feel. History buffs will also find themselves delighted by the historical campaigns and the changing art style of the buildings as they progress through the ages.

The only real downsides are the ease with which you can lose your rhythm, and the almost mandatory use of hotkeys in multiplayer due to bad pathfinding and unit AI.