Has it really been a year since the first half of Broken Age came out? Wow. That makes it nearly exactly three years since Double Fine funded their Adventure and the public went crazy for Kickstarter. Some may say the public has soured on Kickstarter since - Yooka-Laylee’s £1.5 million at the time of writing says otherwise. Nevertheless three years is a long time, although admittedly not to make a game from scratch complete with a new engine, but I’m sure many people are still eager to know how Shay and Vella’s stories, not to mention Double Fine’s big gamble, turned out.

The most important thing to remember about Broken Age: Act 2 is that it is literally the second half of a game and has not been sold as a separate product. Anyone who bought Act 1 gets the conclusion for free. Therefore consider this review an extension to my Broken Age: Act 1 review which you should have a read of first. Oh, and I’ll reiterate that I was a Kickstarter backer again, although you’re not going to find my name in the credits or anything. 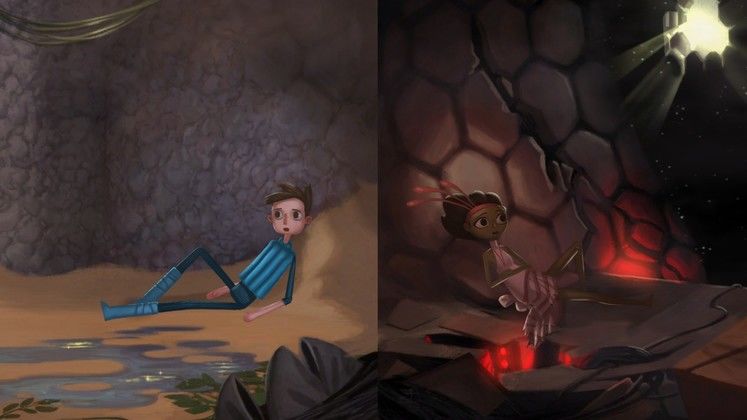 The end of Act 1 saw Shay and Vella brought together, then separated again. Sniff.

I don’t want to spoil things too much for this Act, but if you haven’t played Act 1 skip this paragraph. Now for everyone else, when we last left Vella and Shay it was revealed that Mog Chothra, the monster terrorizing Vella’s village and many more, was actually the “spaceship” that Shay called home. Now the pair have changed places, with Vella aboard the now hideously damaged ship and Shay stranded on the surface, and things are going to go from bad to worse for them.

Let me remind you of the good things in Act 1. The animation, the sound, music and voice acting, the story and writing were all superb. You’ll be pleased to hear that most of these things continue to be great in Act 2, in fact I only have trouble with one of them that I’ll get to in due course… no, f*** suspense, it’s the story. I have absolutely no doubt that the story changed sometime between the completion of Act 1 and now. The reason I think this is that several major story points from Act 1 are done away with (most notably Shay’s computer-based “Mom” and “Dad” whose real identities are “revealed” in the first few minutes of Act 2), and several plot points are outright contradicted with the flimsiest of explanations.

It’s hard to get into too much story detail without spoilers, but I’ll definitely say that the ending left me unsatisfied. Shay and Vella barely get any time together at all before the credits cut in, and the final puzzle results in a massive stroke of luck that defies possibility as well as making no sense (see puzzles, later). Moreover the villains of the story make next to no appearance before they’re destroyed utterly, and you don’t even get to see their base despite being supposedly in it. 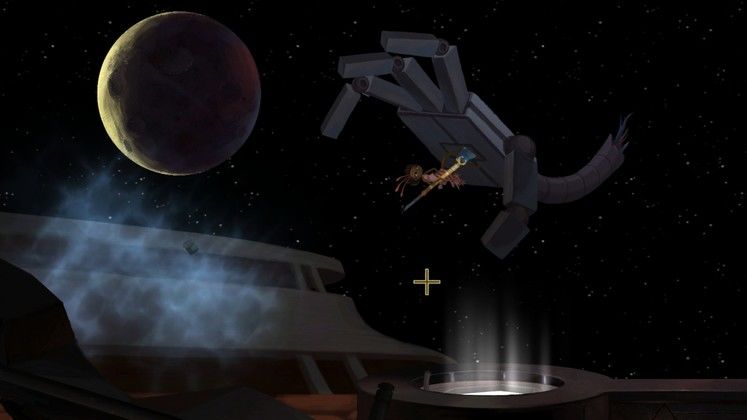 Ah yes, that brings me to my next disappointment in Act 2: there are a few too many cut corners here, particularly regarding locations. Double Fine have very publicly said that the Kickstarter funds ran out over a year ago and they’d been funding it themselves, so they released Act 1 to boost their budget. Well, it clearly wasn’t enough, as there are only a couple of new locations in Act 2 outside of cutscenes. For the most part Shay just explores Vella’s locations from Act 1, and vice versa. This isn’t always a bad thing - look at Day of the Tentacle for example - but it’s majorly disappointing when Vella is brought in to the villain’s lair inside the ominous Plague Dam and we never get to explore it.

The writing though in general is excellent, by which I mean the character dialogue. This has always been Tim Schafer and Double Fine’s forte and Broken Age is some of their best work. The talking tree remains a highlight, and Act 1’s brilliant pedantic spoon is joined by a slightly psychotic knife and a fork who broke the spoon’s heart. These guys along with the knitted Pals, Jack Black’s Harm’ny Lightbeard and Wil Wheaton’s now ex-lumberjack Curtis are hugely entertaining, although Vella and Shay still make lovely travelling companions. While Broken Age isn’t a laugh riot like Monkey Island (to anyone who’s played Schafer’s other games like Grim Fandango this isn’t a surprise) it does get the jabs in to keep you playing even if the story peters out. Most importantly for this adventure fan using unlikely items in pointless ways almost always brings out a witty response rather than the stock “that doesn’t work” s**t some less impressive adventures try to pull.

Just like Act 1, the animation, music, and voice acting are all still great. Peter McConnell pulls in another lovely score, and everyone from celebrity to Double Fine and voice acting regulars act their little hearts out. They’re clearly all enjoying themselves too. The animation though is the highlight of Broken Age. It really looks like a children’s storybook come to life - and I don’t mean like a movie, I mean come to life. Every character is in a constant state of movement, always twitching, looking around or going about their day, in a way that’s very lifelike and almost unheard of in gaming. Even the best animation in other games usually only has the occasional bit of movement, but in Broken Age the characters are never still. It’s just a joy to look at. 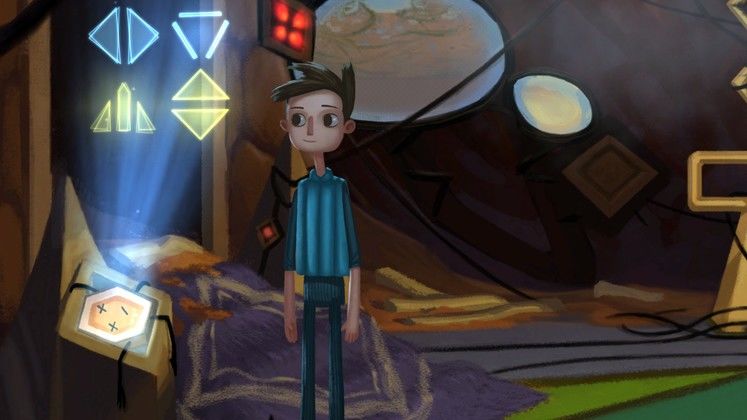 BACK AWAY FROM THE HEXIPAL.

So have the Bad Points from my review of Act 1 then, specifically puzzles and running time, been improved? Well, yes and no. Running time definitely no, as aside from getting stuck you’ll still probably clock Act 2 in the same 3-4 hours, but that makes for a 6-8 hour game which isn’t too bad. It’s the puzzles that are both improved and, uh, unproved. They’re generally good and tougher than Act 1’s puzzles, hooray, but there’s a few times where they just feel forced - like an early one where character Carol (or Car’l) wants a hook for fishing and for some reason is making hooks with wire, which Shay needs, and yet won’t simply give you the clearly useless wire or even just swap it for the hook Shay actually has, no, you have to “catch” a clearly fake fish first… which just randomly appears out of nowhere. The player didn’t “earn” it, so that was a bit of a cheat all the way.

Furthermore there are several big puzzles that just got frustrating. Puzzles are supposed to be solved, not endured through. The first is a knot puzzle (also involving Carol/Car’l) which involves you going back-and-forth, making knot descriptions that look nothing like the actual knot so it comes completely down to guesswork. At least there’s a “skip to Carol” option, which is also the same with a puzzle involving identifying Shay’s first boot size, which is cute… but very unhelpful that the game shows you a chart and then doesn’t allow you to write on it. Then there’s the various Hexipal (your mute robot friends) rewiring puzzles, of which there are far too many. I get the gist of these and they could have been clever, requiring thinking outside the box of the use of various actions you can get the Hexipals to do, but in practice it’s deeply tedious and far too complicated. This makes the final puzzle especially bad as you have to continuous rewire the robots every time you make a mistake, which’ll be often, and when everything finally goes right… the solution to the last puzzle makes no sense. No spoilers, but for anyone who’s played it: why exactly did Shay and Vella do that? How would that help anything or anyone, other then through sheer dumb luck and coincidence?

Overall Broken Age is hugely fun game, but hardly the second coming of LucasArts as many backers probably hoped. Animation, sound, voice acting, dialogue, character, all of this is absolutely top-of-the-range, no game better in the industry, and it all makes the experience worthwhile. Where Act 2 stumbles is in story that doesn’t quite feel like it fits with Act 1 and comes to an unsatisfying end, but mostly the Achilles heel of Broken Age lies in the puzzles. In Act 1 they were too easy, in Act 2 they’re harder but a few examples just make the whole experience frustrating. Overall I can just about give Broken Age as a whole an 8.0, but if we’re talking Act 2 alone then it’d be 7.5 or even 7.0. A lovely experience that I recommend any adventure gamer try, but it ain’t no Maniac Mansion 3.