Call of Juarez: The Cartel

Call of Juarez: The Cartel Review

When it comes to cleanin’ up the New Wild West, Chris Capel is the best scrubber around

After two unspectacular but well-received Call of Juarez games set in the Old West, fans like myself were really hoping Techland would knock it out of the park with the third instalment and produce their best Western FPS ever. Well, they haven’t. It’s not their best and it’s not even a proper Western. It is however an FPS, so they got that right. Kind of.

While the action is still set around the same areas as the first two games, including the town of Juarez, the game itself is actually set in modern times (no, not the Charlie Chaplin movie). I must admit to being worried about this particular fact since the moment I heard about it. Despite the efforts of Techland and Rockstar there simply aren’t enough games set in the Old West, so to see one of the few series that did instead go all Modern Warfare is hugely disheartening.


Unfortunately my worries were justified. Call of Juarez: The Cartel has very little personal identity, but what makes it even worse is that even without the Western theme Bound In Blood was still a good game - The Cartel isn’t. The box doesn’t inspire confidence either, proudly proclaiming that the game has a “multiplayer mode” and that you can deliver Old West-style justice with rocket launchers. Oh, and “Wild West” is supposed to be two words guys.

Then the game starts and things get uglier. In some ways literally, and I’m not talking about the freaky Obama mask one of the characters is inexplicably wearing. Despite supporting the supposedly state-of-the-art Chrome 5 engine the game often wavers between “pretty okay” and “worse than Duke Nukem Forever”. After The Cartel’s strip club level you’ll be begging for Titty City. Ahem.

Audio isn’t much better, with all the voices sounding like they’ve been recorded in the bath. It’s made worse by the game shoving “fuck” into every sentence as much as possible, which gets embarrassing quickly. Then there are the weird oddities, like the ‘Skip Movie’ message taking up a quarter of the screen, having objective markers everywhere, the leads all only having a few lines and the glitches which appear far too often. This is not a polished game.

The first few hours of playing The Cartel are not a pleasant experience. Being thrown straight into a car chase/shooting sequence may have seemed like a fun action-movie thing to do but it really doesn’t work here, it’s just confusing for players and looks atrocious. Then we cut back a few hours and watch our trio of heroes get forced together.

Before I carry on with the negativity (and how) I suppose I better tell you about the setup. The Cartel is a co-op-focused FPS, and each level starts in a lobby where up to three players can join at any time… unless of course one of those players aren’t as far in as you, in which can they can’t join (I’m just describing the game and I still can’t avoid being negative). While the characters generally stay together there are many moments where one player takes a completely different route and sees a completely different side to the story, which is quite cool. Also nice is how each character has their own agendas, which have to be carried out secretly in missions to get a big XP bonus. You get spotted by another player though and you lose the bonus.


The co-op aspect is generally solid and works pretty well, although there’s nothing that can’t also be done in single-player. However I’d advise against that as the computer-controlled partners are incompetent morons who shout insults at you every ten seconds. I watched the AI Eddie admire the scenery while ten gang members shot at him, then proceeded to tell me my aiming was shit. Fun. No, wait, the other thing: extremely aggravating.

Then we get to the controls, which are an utter mess – and, of course, can’t be changed as per Stupid Console Gaming Law. Change weapon on RB, Y is reload, left clicker is melee, right clicker is sprint, and Concentration Mode is left on the D-pad. Right on the D-pad doesn’t have a function. It’s all very nutty and hard to get used to, so try not to play any other FPSs before you’ve finished it. That’ll screw you completely up.

Then we get to the shooting, which is where The Cartel completely falls down. Invisible boundaries surround every object and nothing can be shot through. You can’t carry more than one big weapon (making sniper rifles and shotguns pretty useless) but you always have two crappy pistols on hand. All the guns are inaccurate and often require a whole clip to down one enemy, especially if he’s hiding behind a small soft chair half his size. Helicopters are just battles of attrition whether you’re holding a rocket launcher or an UZI. You get injured easily but heal slowly. Every time I thought I’d seen all the irritating flaws in the shooting the game brought in a new one.

Even Concentration Mode, which in previous Call of Juarez games was quite innovative and worked well, and was adapted/stolen by Rockstar for Red Dead Redemption, has been watered down into just a very very short burst of slow-motion. It takes ages to build up then it’s over before you can kill more than two enemies. Terrible.

After the stupid car chase and the following cutscene, you start by a car. You get in, drive down the road, and smash into a tanker truck you couldn’t see while you were still getting used to the controls. In many ways that sums up the experience I had playing The Cartel: a car crash that was in no way my fault mostly caused through shonky controls and a lack of vision. Actually, scratch that last comparison: I totally saw that this was coming.

Apart from the co-op and a few neat ideas, if we’re fishing for positives the multiplayer is a good place to start. Best described as Kane & Lynch meets Medal of Honor with the gang warfare Cartel Deal and Robbery, they’re pretty cool and worth the odd round… if the damn multiplayer works. It was actually down when I last went to try it, and besides – I can’t imagine anyone playing this game’s multiplayer for long. In a month’s time no one will be on it.


Call of Juarez was an excellent series that I was very much looking forward to see finally go co-op, but not like this. This can’t be the same developer that made the last two games. That team must be off doing Dead Island or something. There were germs of good ideas in here, and it is possible to play it through to the end, but the criticisms and frustrations will overwhelm any fun you have doing so. Seriously, I had several pages’ worth I couldn’t fit in this review (why do I instantly fail the mission if I start exploring?!). There’s a reason why the PC release is a straight-to-budget title: that’s the correct price.

The story gets a little interesting, particularly the way each character is shady and has a different viewpoint with no-one getting the full picture, but there’s not enough to make me want to play it again to find out the rest. Call of Juarez: The Cartel is a disappointment and probably the end of a franchise that always had potential but never quite succeeded. And now it never will. Shame.

Being assigned a secret mission to carry out under the noses of your partners, while also keeping an eye on them so they can’t accomplish their own.

CALL OF JUAREZ: THE CARTEL VERDICT

The story gets a little interesting, particularly the way each character is shady and has a different viewpoint with no-one getting the full picture, but there’s not enough to make me want to play it again to find out the rest. Call of Juarez: The Cartel is a disappointment and probably the end of a franchise that always had potential but never quite succeeded. And now it never will. Shame.

Being assigned a secret mission to carry out under the noses of your partners, while also keeping an eye on them so they can’t accomplish their own.

Call of Juarez: The Cartel Essentials 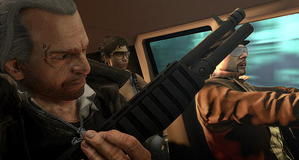