Don’t get caught by the fuzz

Suffering from a severe lack of polish, Enforcer Police Crime Action is a buggy and poor-looking game that frequently fails to deliver anything particularly interesting or authentic. Putting you in the shoes of a rookie Police officer you get to progress up the enforcement ladder by completing missions, upholding the law and balancing work with a home life. Unfortunately Enforcer doesn’t do any of these very well and aside from the interesting premise, this is police brutality in video game form.

You start off as a lowly police officer, freshly arrived from the big city after your mother has fallen ill. The bright lights of the metropolis give way to a sparsely populated town that is now in the terrifying grip of ‘drug dealers’ and needing you to get the scumbags off the streets. Whether or not they’re pushing Aspirin or Heroin isn’t made clear so feel free to make up your own narrative. 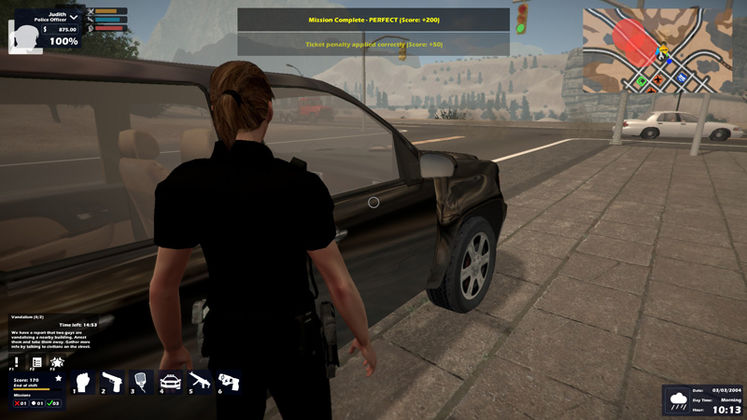 Yeah, we showed that illegally-parked car who the boss is

A great premise then, if you’re into living the life of a law-enforcement officer, following rules and procedure and slowly working your way up the police food chain to grand commissioner. A good premise doesn’t equal a good game and sadly, Enforcer is beset with technical difficulties and poor visuals leading to an experience that frustrates and irritates to no end.

Let’s start with the obvious - the visuals - which in this modern era look pretty poor and washed out. To be fair, the small development team from Brazil have done a good job in creating a unique take on the simulation genre, it’s just unfortunate that Enforcer can never get close to a game engine advanced enough to pull it off effectively. Your character is pulled in very close to the camera which makes the low resolution textures look worse and the controls unresponsive.

NPCs walk around randomly next to the road even though most of the map is set in the countryside and hilarious car pile ups happen because big trucks frequently cut corners and can’t get their path finding back on track. This appears to leave a logic puzzle for the gormless NPCs to try and solve by walking into the middle of the road and spinning in circles. Hilarious, but if I’d paid for this experience I’d be a little more than miffed.

As a police officer you begin your shift early in the morning and are given missions throughout the day to complete in order to earn points and money. Points, as every Brucie fan knows, means prizes, but the only prize here is promotion leading to more important missions and more money. That money you earn can be spent on your boxy box of house just outside of town, filling it out with new furniture and clothes for yourself. 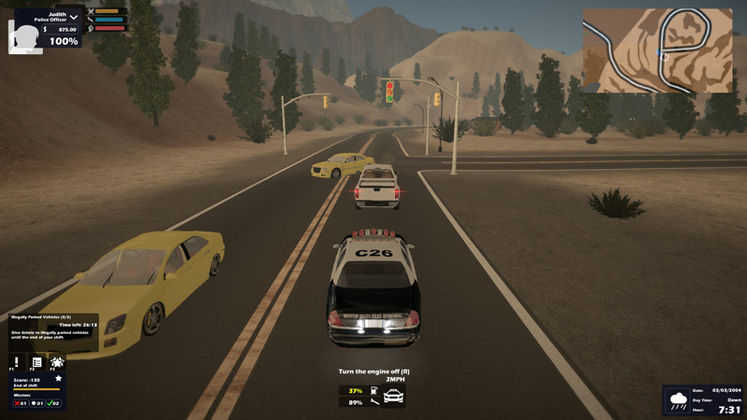 Why would you need to do that? Well, not only have you got a day job to manage you also have to manage your own stress, sleep and hunger levels. The more hours you work the more stressed you get which can be relieved by watching TV or having a shower. Sadly there are no burgers or doughnuts to buy as food is ordered by walking to your fridge and pressing E. Just a shame they couldn’t get a Krispy Kreme sponsorship deal.

It’s laudable that you have an off-duty aspect to the game as part of the simulation but it’s just so frustrating and clunky to use that is serves only to frustrate and not immerse. That same feeling bleeds over to other aspects that you have to micro-manage, like filling up your squad car with petrol and keeping it repaired. Fine in principle but it’s way too aggressive with these declining bars and time progression in the game that you constantly have to charge around against the clock.

Mission types vary from investigating robberies, to which you will need to get a warrant to enter a house, to putting up roadblocks, checking for traffic offences and laying down speed traps. These start to get more important as you progress, pushing you towards the drug gangs that are apparently ruining life for everyone in this sparse utopia. It’s not particularly gripping but then I don’t think it’s meant to be as this is trying to be a simulator not Bad Lieutenant.

That authentic simulation approach can work well in games like Farming Simulator where the game is unashamedly dry and has its legion of fans willing to spend hours cutting down crops in an authentic-sounding Massey Ferguson. Enforcer just doesn’t have the technical prowess to pull of what it’s trying to do. It’s not fun to play and even though simulator games aren’t my favourite cup of tea, I would want far more detail on police procedure and protocol than Enforcer can provide. 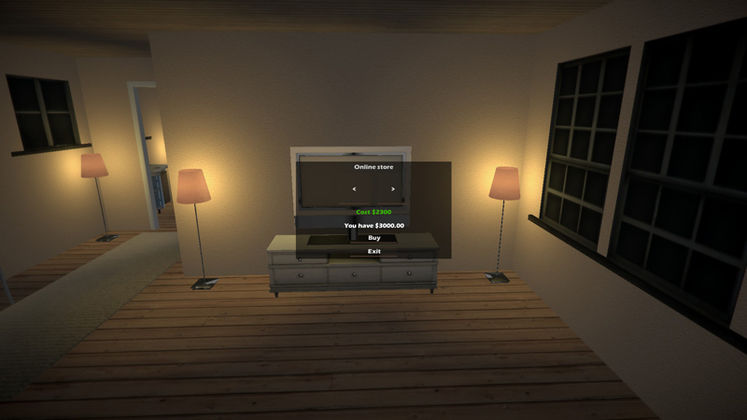 Spending my hard-earned cash on a TV... in my box house

This gets marks for trying something new and I know the developers are keen to update the game and patch out the bugs. However, I constantly kept running into problems with mission critical NPCs getting stuck in doors or being unable to interact with suspects or criminals. Draw distance is also poor with objects popping in front of you if you go too fast in a car and characters dropping from the sky in some instances.

Residents in this bizarre town also seem to have access to advanced technology as flying cars are an occasional occurrence. That wouldn’t be so bad if I had a jetpack to issue a ticket but, yeah, no such luck. One buggy instance meant I couldn’t enter the police station to finish my shift which meant reloading and losing progress. Until these critical issues are patched out I can’t recommend Enforcer even as a curiosity.

I love the idea of an authentic police simulator game but Enforcer isn’t that. It’s just a buggy mess with some potential hidden away amongst the basic visuals and sparse structure. If you really want a police simulator then the Liberty City Police Mod for GTA IV offers a far superior experience.

Putting up a roadblock and getting flying cars. *Shakes fist 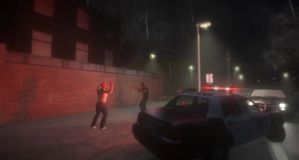