Mary had a little lemming

Now that Team 17 have finally realised that Worms could do with a break they've branched out into more interesting original titles. The Escapists is only on Early Access and is already fun, but Light was a disappointment: an intriguing idea that was spoilt by being only an hour long and feeling like the opening act of a great game that never came. Those are only published by Team 17 however, what of their own development teams? While I'm sure some of them are working on a gritty dark subtitle-less Worms reboot the rest have been developing the sheep-based puzzler Flockers. It's now out of Early Access so let's take a look to see if it's good or baaad. No more sheep puns from now on, promise.

Let's cut right to the chase if you haven't read our preview of the game: it's Lemmings. While there are most definitely differences and improvements the core gameplay is straight from the 1991 classic that launched the company now known as Rockstar to fame and fortune. Which is no bad thing. Considering it's been out twice as long there are actually more copycats and sequels of Grand Theft Auto out there than Lemmings, and Sony seem to be sitting on the licence and doing nothing with it (and heaven forbid they make it available on PC). Oh, and Team 17 actually developed the last well-received Lemmings game so they're the perfect team to update it. Which they have.

Anyway, that core gameplay in case you've never played or seen any Lemmings game (HOW?!) goes like this: you have a group of stupid animals (in this case sheep) who continually walk forward, and you have to shepherd them (heh) out of certain doom by assigning them a number of abilities and using the stage to your advantage. You have to pause the game often to work out your next move as the levels can get quite taxing. Once you've got as many animals as you can through the finish gate you move on to the next stage, which get progressively harder as you go along. All this remains the same between Lemmings and Flockers, but as it's been so long since the last Lemmings (Team 17's PSP title came out in 2007) it feels less like a rip-off and more just comfortably familiar.

With the core gameplay in place it all comes down to how Team 17 handle it, and I'm pleased to say they handle it very well indeed. The puzzles get more devious as you move through the game's 60 stages, so while the first few levels can be defeated first time with a bit of trial and error the final levels will require multiple restarts. And even if you pass the level there are still hidden "Golden Sheep" and six bonus levels to find, not to mention replaying them just to save as many sheep as possible and getting a better score. Control-wise things are generally perfect too, with a much-appreciated "multi-select" option on the Right Mouse Button to assign abilities to multiple sheep at once. Flockers gets the addictive gameplay of Lemmings just right, and what's better is that it adds to it.


The special abilities, which you can pick up from crates and only ever have a limited number of, go like this: Jumper (automatically jumps gaps), Super Sheep (flies up a straight wall and can fall any distance), Exploder (identical to the Lemmings classic, explodes a sheep after a few seconds), four different "shape" abilities you can order your sheep to position themselves in, and Normal (makes a sheep in a shape start moving again). While at first these seem lacking compared to the diverse range of abilities in Lemmings they actually work very well in tandem, like putting a "staircase" of sheep the wrong way to stop a Super Sheep, or by exploding the bottom sheep in that staircase and sending any above it flying across the map. A lot of clever strategy soon starts appearing from these seemingly simple abilities, and that's even before we get into the levels themselves.

The stages are delightfully designed, with every platform and corner carefully considered - that time in Steam Early Access clearly helped. Beyond simple good design there are also a host of hazards (spikes, axes, hammers, giant metal Worm-operated machines of death) and several interactive elements such as buttons, anti-gravity, teleporters, and er, physics. Yes, the one area that Flockers soars up and away from Lemmings is actually the physics engine - lifts requiring weight lower with the right number of sheep on them, balls roll and gain momentum, swinging axes swing believably, it's all very Mouse Trap-like and the amount of physical objects in play is both a wonder to behold and makes getting through the stages both more tricky and more fun.

Then if all that and the replay value wasn't enough, there's also Steam Workshop support. Simple fun stages have already started going up and even with 60+ levels in the main game there's potentially an infinite amount if the community sinks its teeth into making them. The levels may be superbly designed but the actual construction is quite simple, they just all require a lot of tweaking and thought to work properly, so anyone could make an entertaining Flockers level quickly and they'd just need to spend time polishing it afterwards.


So that's a lot of praise, but what's wrong with it? Well, there aren't any real "big" problems but there are a couple of medium and a few small ones. First medium: the puzzle solving can get a little too trial-and-error for comfort, with switches in particular having such random applications that you'll occasionally be restarting or losing many sheep just because you had no idea what was going to happen - which isn't always fun. Second medium: the levels could do with more variety. There are several backgrounds and music types but they only swap after about 10 stages, so you'll be bored of the look before it changes - why couldn't the look change every level like in Lemmings? As for small problems: there's no 'Continue' button on the opening screen, camera scroll movement is a bit jerky, and it's perhaps a little too brutal on the poor sheep. Sheep exploding into a shower of blood and guts is fine, but their cute bodies hanging limply and dripping blood from spikes? In my opinion it's just a mite too far.

Overall though I really enjoyed Flockers. The levels may get a little samey in look but are well designed and really tax the brain muscles, the challenge is just right and ramps up perfectly, the cuteness of the sheep is inarguable and the Steam Workshop support is just icing on an already decently-sized replay value cake. Flockers proves that Team 17 still have it in them to make a great game. Even if it’s just a nicer version of Lemmings at the end of the day, Flockers at least isn’t trying to pull the wool over your eyes. It’s baarilliant. Now I’m going to get the flock out of here.

Enacting a plan and creating a perfect playthrough with golden sheep collected? Better than sheep shagging. 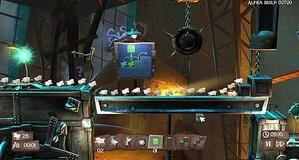