Does Ubisoft's new medieval fighting game do enough to impress?

I’m sure everyone reading this has had a conversation with one of your friends along the lines of, “Who do you think would win in a fight between a Knight, a Viking or a Samurai?”. Well, some developers at Ubisoft had this conversation and decided to make a game about it. That may not be factually accurate, but what it accurate is that For Honor allows you to settle this age old debate once and for all.

For Honor is a medieval-based fighting game that allows players to choose between three different factions: The Knights, The Vikings, and The Samurais. Each faction has four individual warriors, with each warrior being separated by a type (The Vanguards, The Assassins, The Heavies and The Hybrids). Utilising a brand new control scheme for combat, dubbed ‘The Art of Battle’ by the developers, players can face each other on the battlefield in 4v4, 2v2 and 1v1 combat. 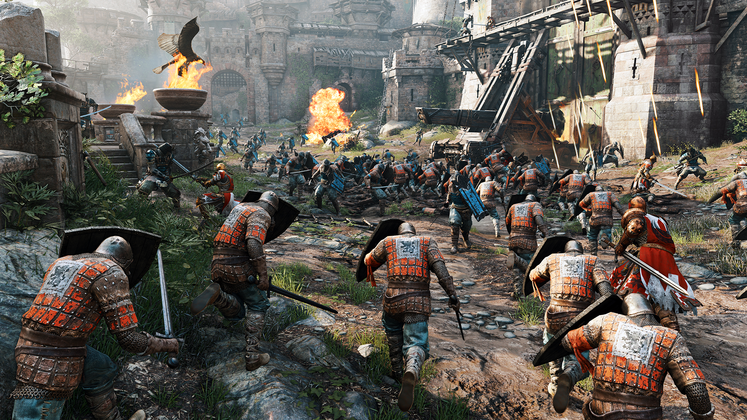 The initial trailers for For Honor made it seem like a medieval action game (which it is), however, I don’t think anyone could have predicted how deep the combat mechanics would end up. If you are familiar with the combat in Dark Souls, that should give you a rough idea of what to expect. Players lock onto their targets and attempt to defeat them in combat. Simple, right? Wrong. In most action games, you have one button to block. For Honor uses a shield divided into three sections to show players where they are blocking and attacking. When one of the shield fragments glows red, that means you need to press the Right Stick in the corresponding direction in order to block. Attacking is very similar to blocking, except this time you press a button to swing your weapon. You can alternate your attacks using quick Light Attacks or slower Heavy Attacks. Light Attacks can be chained together to perform a combo, but try not to be predictable with the direction of your moves as your opponent can dodge and even parry your blows.

The combat system in For Honor is impressive, to say the least. It has everything a competitive player could ask for (a parrying system, special dodges that let you counter easier) while still catering to beginners. Unlike most fighting games, For Honor indicates where players will be attacked from much earlier than usual. People that like to play a more reactionary game can try their luck at parrying, or if you’d like to play it safe you can pick a Hero that doesn’t feature a block timer. For Honor launches with twelve unique Heroes who all play very differently from one another. While Heroes may share characteristics with each other, they each have special properties that make them unique. Take these two Heavies as an example: The Viking’s Warlord has an unblockable headbutt, whereas The Samurai’s Shugoki have a passive ability allows him to absorb one attack. These changes may seem minor but they make huge differences when it comes to the combat. 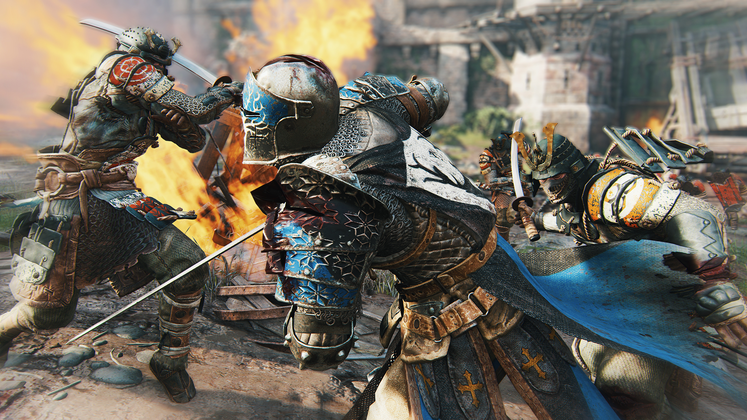 Just like most fighting games, For Honor features a lacklustre campaign that lasts around six to eight hours. If you were to judge the game from the trailers, you may expect a much more action-focused campaign. This is a fighting game, not an Action-RPG, so don’t expect anything on the level of Dark Souls here. For Honor’s biggest problem isn’t the fact that the campaign is poor, the real issue is caused by Ubisoft’s Always-On DRM system. Now this could be a temporary problem due to the game launching recently, but there have been reports of the game cutting out randomly during the campaign. This brings us to another massive problem with For Honor overall: Peer-to-peer (P2P).

P2P may have some advantages when it comes to certain games, but For Honor is certainly not one of them. For Honor features multiplayer modes that let you fight with up to eight players. If one of those eight players drops from the game (be it from rage quitting or For Honor kicking them), the entire game will freeze for five seconds before reconnecting again. P2P games are targeted by trolls as they are the easiest games to ruin. Using a lag switch (a device made to make the player’s Internet connection intentionally worse), trolls can make the experience terrible for every person connected to the match. The worst part of this is that these trolls cannot be punished by Ubisoft. There are currently no punishments in place to people who ruin the game through rage quitting or using a lag switch, and that is primarily due to For Honor randomly kicking players from games. No matter how you look at it, P2P is always worse than having dedicated servers. Switching to dedicated servers may not improve the gameplay, but it will definitely improve the overall experience for players. 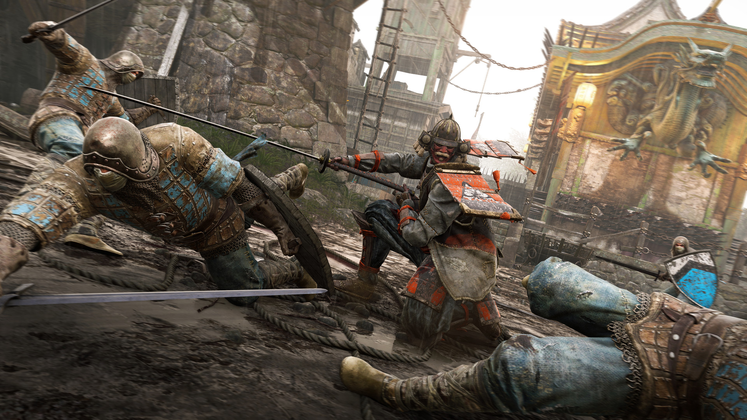 For Honor features four different multiplayer modes: Dominion, a 4v4 objective-based mode where teams of four (along with AI companions) attempt to capture three different zones on the battlefield; Elimination, a best of five, 4v4 no respawn mode (also featuring AI companions) in which each team has to wipe out the opposition; Skirmish, 4v4 Team Deathmatch featuring what are essentially Call of Duty Kill Streaks; and Brawls, a best of five, 1v1 or 2v2 mode in which both teams fight to the death. There are a total of twelve multiplayer maps right now featuring four to six variations, giving players a total of sixty different variations to try out. More maps will be added as free DLC post-launch.

You can personalise your Hero with special gear in the game, including special pieces of gear that change the stats of your Hero. These pieces of gear will change the appearance of your Hero, but the stat changes will only work in Dominion, Elimination and Skirmish. Players who want to play in a more casual fashion should stick to the 4v4 modes as they tend to have a respawn timer on, as well as AI opponents that can be easily taken down. For players who want to take the game more seriously, you will want to check out the Brawls to experience a proper fight. 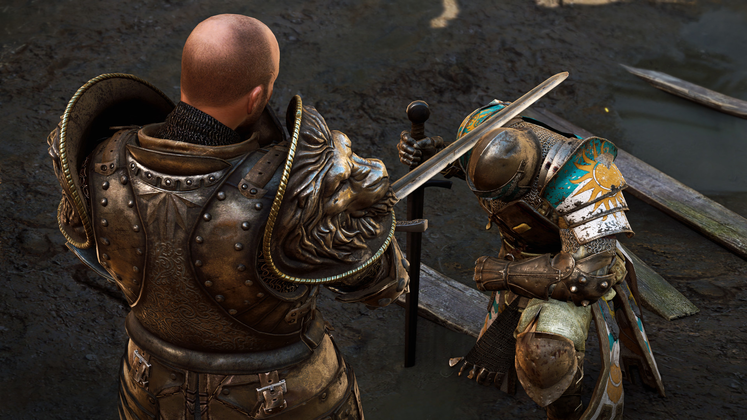 After playing the multiplayer of For Honor for several hours, I can confirm that the people who play this game undoubtedly lack any type of honour. You’ll get people running away from you for several minutes, or my personal favourite, staying close to edges in hopes they will get the chance to throw you out of the stage. I love this aspect of the game. Most players expect you to be honourable in battles, and those players are usually the ones that end up being killed first. Sure, it is annoying to have to hunt down someone who has been running away, but the feeling of finally putting those dogs down is amazing.

My time spent playing For Honor’s multiplayer modes (primarily the Brawls) has been very good. The 4v4 modes are quite fun, but the Brawls are where the truly calculated battles take place. Some people may think the fighting system in For Honor looks simple; put those same people in a 1v1 Duel and they’ll take back their words. Nothing feels cheap in For Honor as there are counters to almost everything each Hero has to offer. This makes the game feel so rewarding when you do start winning matches. I was surprised to see that there doesn’t appear to be any obvious balancing issues either. You can play as a Heavy Hero versus a more lightweight Hero and still do well in a fight. On a side note, it is worth mentioning the player-base on PC seems very healthy. Though I can’t provide exact numbers right now, I did notice the game had over seventy thousand people online at several points during the launch week. 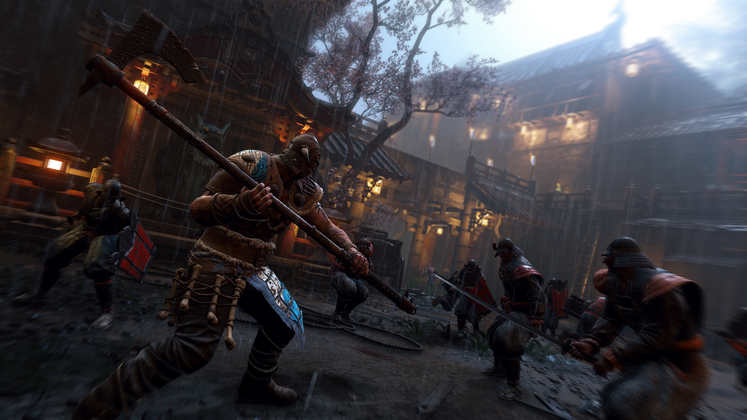 For Honor’s RRP (recommended retail price) is $60/£40. Most consumers will be expecting a game that isn’t as multiplayer focused as this is for that amount of cash. If players do not enjoy the multiplayer aspect of For Honor, they might as well return the game as there is nothing else worth seeing. Had this game launched at $40/£20, I would have a much easier time recommending it. We all know what happens when you release a barebones fighting game (Street Fighter V…), and it isn’t fair to call For Honor a barebones game. There’s just not enough of a single-player focus to keep people who aren’t fighting game fans entertained, especially not for $60/£40.

The game ran perfectly on my PC (i7 6700k, GTX 1080), but that is expected. I’ve read reports of For Honor running very well on low-end Nvidia GPUs, so perhaps some of you won’t have to worry about running the game at acceptable levels. Ultrawide monitor owners will be pleased to know that the game runs flawlessly at 21:9, you won’t be needing to download any mods here.

Ubisoft have two game series that will always stick out to me for their debut games: Watch Dogs and Assassin’s Creed. The reason for this is simple: both games had interesting concepts but they weren’t fully realised until the sequel. For Honor is similar in this regard as there are clear things that can be improved with a sequel, however I still believe it is well worth playing. The combat in the game is fantastic, and though the learning curve may be steep, once you get the hang of it you’ll be playing for hours. The first entry in the For Honor series has started strong, I hope a sequel can fill in everything the game currently lacks.

Winning a 1v3 battle as the last person remaining on my team.