Can the Sandstorm expansion help sort out the Global issues?

If Global Agenda teaches us anything, it's that adding jetpacks to a fairly average shooter makes for a hell of a good time. Yet even these wonderful contraptions were not enough to stir up interest when Hi-Rez Studios released its MMO blaster back in February, and subscription numbers began to dwindle rapidly.

Rather than let it die, however, Hi-Rez took a different approach, swapping a monthly fee based pricing plan for a simple one off payment, and adding a huge, open-world chunk of gaming in the form of the Sandstorm expansion. While it was difficult to recommend Global Agenda back at launch, there's far more to enjoy now and those jetpacks are sounding even more tasty. Sure, there are a few niggles here and there, but get a group of friends together and you'll have a blast.


Global Agenda: Sandstorm is a huge online multiplayer shooter based around a central hub called Dome City. Players kit themselves out with the most expensive gear they can afford, join up with a team of willing team-mates then take on a variety of PvE missions or PvP arenas. There are plenty of statistics available to keep the most learned MMO players entertained, and you'll be grinding away until level 50 is achieved.

The most notable point to make is that Global Agenda is not the most ideal MMO for beginners to the genre. Barely anything is explained in terms of equipment, stats, locations and all the minor details - rather, you're left to work it all out by yourself. Apart from a short lesson on shooting enemies, there are terminals you can activate which will guide you to the shop or services you require, but you're then left to figure them out yourself.

I found that after playing the game for around 20 hours, I still didn't have a clue what certain elements were. That slight doubt in the back of your mind can spoil the experience now and again, and it would have been useful if each section of the game was properly explained, instead of having to work everything out by trial and error.

Fortunately, you'll be too caught up in the lovely customization options to notice. Global Agenda provides plenty of different suit and weapon collectibles, allowing you to completely change what your character looks like and how your blasters work. You'll spend a fair amount of time strutting around the central hub in the company of other GA players, so you'll want to look your best. If you've never been the grooming type, prepare to have your mind changed.

The missions on offer are pretty decent, mainly consisting of robots with guns trying to cut your life short. Of course, your guns are bigger and you'll empty room after room before coming face to face with a range of great boss battles. All of this action is taken up a notch thanks to the power of flight - jetpacking around is awesome fun, and swooping in to deal death from the skies should really be mandatory in all games.


The addition of the jetpack also allows for some great level design. Whereas in the likes of World of Warcraft, players are kept firmly on the ground and, as such, levels must be created to match this criteria. Hi-Rez Studios has given the player the opportunity to fly anywhere they want - hence, missions involve platforming sections, with areas high up to explore and wide open scapes to blast around.

The PvP arenas step the entertainment up a notch, with players taking part in deathmatch style gameplay, as well as the usual suspects like King of the Hill. Play areas are huge and provide more than sufficient space for blasting around and shooting down the opposing team. Each class has their own unique roles, be it building turrets and forcefields to providing heavy-duty fire power when capturing a point. Think Team Fortress 2 with jetpacks and you're almost there.

While it's all good fun, especially with a full team of friends, there's a severe lack of content. Initially you can only play a handful of missions, and it takes a rather long time to unlock more. Even once you've unlocked everything, there is very little to see, and you'll be playing the same missions over and over again, which can be pretty dull.

This is where the Sandstorm expansion comes in, adding a huge open-world desert area outside the doors of Dome City. In this sandy world, players are given quests similar to those found in standard MMOs, and allow the opportunity to explore. This outdoor experience is where the jetpacks are really given the space to shine, and you'll witness players zooming all over the place, shooting into the sky and dropping down on unsuspecting robotic enemies.

The quests could have done with some work. The majority consist of your bog-standard World of Warcraft style 'Kill X number of Y enemy' or 'Go and find this person', which can be quite boring after a while. It's also a little silly that when doing these missions, you can't properly band together with friends. If you're in a team with mates and you kill a bad guy for a missions objective, each person in your team then has to wait for the baddie to respawn and kill it individually.


If anything, it would have been great to have a Borderlands style of play, where everyone in the team completes the quest whether they made the finishing blow or not. These series of quests are also quite short - you'll have them all tagged and bagged within the space of five hours. For veteran Global Agenda players, however, this new playground will be a welcome break from the confines of Dome City.

Through all its faults, Global Agenda: Sandstorm is still worth checking out. It’s a slow-burner, but after a few dozen hours of play you’ll be blasting with the best of them, going off on raids with friends and modding your weapons to be ridiculously powerful. Hopefully Hi-Rez Studios will add even more expansions in the future, as a bit of extra content would do this game wonders.

Delivering the final blow in a particularly grueling boss battle. 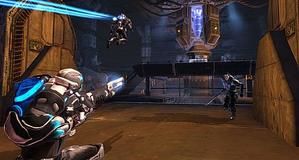