Cars with Jetpacks? Not quite, but close enough

Jet Car Stunts asks a simple question – wouldn't it be awesome to drive a sports car with a jet engine attached to it?

Jet Stunt Cars takes cues from the Trackmania series as well as titles like Joe Danger in combining a racing game with a platformer. While there are time trials and ghosts to race against, your first focus will simply be surviving to the end of each level, using your jet boosts and air-brakes to navigate the fiendishly constructed platform efforts. Tracks start out relatively simple, using your jets to take off after hitting ramps, and there's a nice feel of momentum and fluidity as you come to grips with controlling your car and taking to the skies.

Adding challenge to the task is the fact that you only have a limited amount of jet boost, which is refilled at each checkpoint you meet. Checkpoints also act as a respawn point should you fall off the track or wreck your car – chances are both of these things will occur frequently. After the tutorial you'll progress through tracks labelled from 'Very Easy' to 'Very Hard' across several different modes and those descriptors aren't lying. The Very Easy and Easy tracks may in fact give you a false sense of security with early struggles being few and far between and you'll begin to believe that this flying car lark is a doddle. But the difficulty soon ramps up. It won't be long before you'll come across tracks that require precision air control and liberal applications of jet boost to ensure you're not trying to cross a giant chasm with nothing but a standard motor to propel you.


Unfortunately it's during these more difficult tracks where the games flaws come into sharper focus. Firstly, the fixed camera means you can often end up taking a leap of faith, guessing at where exactly the ground is as you sweep through the air. This becomes even worse when you're driving through a giant loop attempting to defy gravity, it can be pretty much impossible to judge which way is up and which is down and this is only exacerbated by the game's presentation that gives you few clues to help orientate yourself.

The car you'll be driving through Jet Car Stunts looks nice enough, a brightly coloured vehicle with a flexible spoiler and a nice air-brake animation - it's not especially fancy but pleasing enough to the eye. The rest of the world and indeed the tracks themselves are primarily constructed through grey and orange blocks, with no smooth edges and a functional cloudy sky background. It's not exactly spectacular to look at and some of the thrill of flying through the sky is lost due to the basic and repetitive scenery.

The physics involved in Jet Car Stunts too feel questionable at times, a slight bump can send your car toppling over, while the 'collect the stars mode' (again bringing Joe Danger to mind) suggests that the game is ill equipped for creative platforming, with the camera refusing to give you any help at all - especially when you're trying to perform complex jumps or air-bound manoeuvres. The fact that all of the courses are made up of square blocks means that the courses often have a few sharp edges that feel placed just to trip you over, sending you hurtling into the sky.


The game features three modes, all of which are fairly self explanatory. Platforming is the mode most people will turn to first. It's also where the brunt of frustration lies as it sharply transforms from challenging and engaging to an exercise in extreme precision and frustration. If you don't hit particular jumps at the exact right angle, the exact right speed, while applying an exact amount of boost, you're going to crash or fly off the edge of the track, repeatedly. You're given 10 retries and frequent checkpoints to help you make it to the end of each, but sometimes even that won't be enough.

Time Trial mode offers its own set of tracks and early efforts showcase that the best thing about having a Jet Engine on a car is that it allows you to travel at ridiculously high speed. These moments are where the promise of the game come through most. Later tracks are more punishing, and surviving the standard 5 laps is a challenge in itself.

Star mode tasks you with going off piste to grab all of the stars littered across a course. Some are easy to come by, some are frustratingly placed and require a creative approach to reach with the fussy physics and static camera perhaps the most challenging obstacles to overcome.


To answer the question posed at the beginning of this review, the answer has to be 'kinda'. At times Jet Car Stunts is a pleasure to play, especially when you don't feel like you're being punished by a track designing sadist. Some of the courses are very cleverly put together indeed, as they transition from soaring high jumps, into tight corners and fancy loops. Others are filled with segments that operate as a frustrating roadblock to your progress, demanding a level of control and precision that will be beyond many players.

That's not to say Jet Car Stunts is not a fun game to pick up and play and if you're interested in chasing high-scores and persevering through extremely challenging courses there's a bountiful package on offer here for you. Unfortunately the fussy physics, camera problems and controls that are difficult to entirely master will halt the progress of all but a persistent few. It is also very important to note that the challenge is hugely amplified by the lack of a controller – keyboard controls don't do Jet Car Stunts justice, and you'd be wise to avoid it unless you own a pad.

That’s not to say Jet Car Stunts is not a fun game to pick up and play and if you’re interested in chasing high-scores and persevering through extremely challenging courses there’s a bountiful package on offer here for you. Unfortunately the fussy physics, camera problems and controls that are difficult to entirely master will halt the progress of all but a persistent few. It is also very important to note that the challenge is hugely amplified by the lack of a controller – keyboard controls don’t do Jet Car Stunts justice, and you’d be wise to avoid it unless you own a pad.

Hitting the jets and burning through the sky as you take off from a giant ramp (as long as you don’t fudge the landing!). 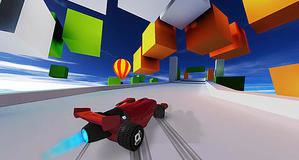