Well, this one crept up on us a bit eh? What with the likes of Skyrim, Dark Souls and Arkham City threatening to turn us into beasts of the night this Autumn, not to mention the showdown between Modern Warfare 3 and Battlefield 3 that is shaping up to be the Oasis vs Blur of the games industry, it was surprisingly easy to forget that a pioneer of the FPS genre also has an offering for us in these darkening times.

Let's get something out of the way first, so that we can quickly move to the true crux of the matter - it's impossible to ignore the fact that id's Rage feels a hell of a lot like co-op shooter Borderlands, with a dash of Fallout 3 thrown in for good measure. Of course, Rage was in fact revealed before Borderlands came onto the scene - but that's simply not enough in this gamer-eat-dog world.


The link between Rage and Borderlands is no doubt going to be the source of many forum discussions and heated debates. Both games feature an open-world wasteland filled with bandits driving buggies around and blasting rockets, while the player moves from town to town, talking to people dressed in tatty end-of-the-world style garments, and completing fetch and kill missions.

However, the question of which came first is completely irrelevant due to one fact - Borderlands is quite simply a better game than Rage. Even putting the comparisons aside, Rage still doesn't add up to much. It feels clumsy, void of immersion and just a little bit dumb.

But let's cover the pros first. As far as looks go, Rage is gob-smackingly beautiful, to the point that it makes brown feel like the new black. It's the kind of game that you purposely make sure is playing on your TV whenever friends call around, just so you can witness their faces and hear them ask with a forced casual air, "What's this then?"

It's not just gorgeous - it's full of character. As you wander around the town areas, there are people going about their business, some standing by waiting for you to ask them a question, others simply setting the mood with their presence. This is a game world most definitely full of life.

The combat is also pretty exciting, and at least on a par with shooters of recent times - most notably, certain areas feel a hell of a lot like Resistance 3. (Note: this is definitely a good thing!) The various weapons and ammo types are fun to play around, and we had a blast simply experimenting.

But - yes, here comes the big but - Rage is also riddled with countless issues, niggles and head-scratching moments that make us wonder where it all went wrong.

The biggest culprit here is the complete lack of immersion. See up there, just three paragraphs up, where we said the game was full of character? It would be utterly splendid if there wasn't a streak of awkward clumsiness splashed straight across it all.

When you approach someone to talk to them, they'll blurt out a line that you are forced to listen to before you can properly interact with them. That'd be fair enough if it didn't feel so forced. Picture this - it's possible to walk back and forth on the spot in the shop in Wellspring, just right in front of the shopkeeper, and he will repeat his line "Care to browse my selection?" over and over again. It's pretty hilarious.

That sounds pretty petty, right? But that's simply one example in a whole game that is drowning in these moments. When a large group of bandits are attacking you, it quickly becomes apparently that it is the same one guy voicing all of them. Once you realise this, it's impossible to shake the feeling that you're listening to the same guy shouting commands at himself over and over again.

When people are talking to you, you can exit the room at any point, and they'll simply stop talking on the spot. We found ourselves entering rooms, waiting for the person to start talking, and then quickly exiting and re-entering again to move the story along more quickly. Oh yes, the story - it's not great. In a nutshell, there are bandits, and you want to kill them all.


Once you begin to move past the silliness of it all, other cracks start to show. The game tells you to be stealthy, but it's utterly pointless to do so, as this is an id shooter - how could stealth possibly work here? There's crafting, but it's incredibly simple, and whenever you need items to craft something, the last NPC you talked to usually gave you what you needed anyway.

You can only sprint for three seconds, at which point your character is breathing very heavily indeed. The melee combat feels pretty terrible, as you turn on the spot to try and hit the enemy who just went bumbling past you and is now also trying to spin around on the spot. It goes on and on.

The racing elements are particularly peculiar. There is nothing wrong at all with how the vehicles handle, but then again, there's nothing special about it either. So for there to be a whole racing section tucked away that requires you to drive around the same dull tracks over and over to unlock better cars - and even a whole multiplayer mode based on it - is rather mind-blowing.

Yet what is easily the most disappointing element of Rage is how linear it all is. The game wants to give the illusion that there are side-quests to do that are beneficial to you, or progress the story - there's even talk of branching storylines.

This is simply not true. Rage may have an open-world wasteland, but it is as linear as it gets. The best way to describe just how linear the game is, is via the jumping ability. You can jump, but for the most part, it's pointless - there are invisible walls all over the place stopping you from even slightly straying from the specifically chosen path, and you're going the way the devs want you to go - don't think you're going off on your own great adventure.

The majority of the side missions involve visiting locations you have already conquered in the main quest, and doing them all over again for some money, or some resources, or something else that you don't particularly want or need. There is no branching story to speak of in any respect.

The worst part is that, as a shooter, Rage ticks all the right boxes. If this was laid out along the same lines as, say, Quake or Doom, just to randomly pick two games out of the air, then it would no doubt be lauded universally as a great, balls-out blaster. The RPG elements have diluted the potential and tacked on exactly what this action didn't need.

Indeed, later into the game, Rage starts to concentrate on the shooting instead, and it all comes together. There are still some of the previously-mentioned niggles here and there, but in general it becomes an enjoyable shooter. If only the six hours before that point hadn't been so foolishly misplaced.

Those looking for multiplayer action will have a welcome - if short-lived - treat, as the co-op is exactly as you'd expect. Taking place in various locations from the single player campaign, two players blast through together, bagging points and adding to their career scores in the process. Again, it's nothing incredible, but it will please those who aren't looking for anything more than that.


At the end of the day, Rage is going to sell by the bucketload due to its remarkable lineage, and there will be armies of fans who will defend it to the bitter end, no matter whether they enjoyed it or not. But for those who will listen: Rage is flawed from the get-go, and by the time it finds its legs, its all too little, too late.

That being said, there’s no denying that the combat elements are right up our street, and this gives us great hope that the upcoming Doom 4 will be an absolute blinder. For now, Rage is id Software’s venture in the realm of role-playing - and now we’d rather it goes back and does what it does best, thanks very much.

Exploring the Dead City - while disappointingly linear - is the first real moment that had us smiling throughout. 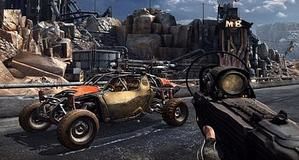