Remember a game called Lords of the Fallen? No? Oh, well, um, it was a game heavily inspired by Dark Souls which came out while PS4 owners were showing off Bloodborne and everyone else was waiting for Dark Souls III. It filled a gap, certainly, but it was never quite as creative or memorable as the From Software games that inspired it. Now developer Deck13 is having another go with The Surge, and considering there hasn’t been any announcements of From Software’s next game Deck13 and Focus Interactive have the Souls field all to themselves. The only problem is… that’s some mighty big shoes to fill.

Review of The Surge, the sci-fi Dark Souls-em-up.

First impressions of The Surge though are undoubtedly good. While Lords of the Fallen made the mistake of going Dark Fantasy and so offering direct comparisons with Dark Souls, The Surge is (as far as I’m aware) the first game with that style of gameplay set in a Science Fiction universe, with Mechs, Robots, Drones, and killer spacesuits with the dead bodies of their former occupants still attached in a similar manner to that recent Doctor Who episode ‘Oxygen’. It is all quite pleasingly different, and juxtaposing the Souls style in this world where you volunteer for body modifications and wake up to find all the machines have gone crazy is cool enough to catch our interest.

We keep on making comparisons to Dark Souls but it really is apt since 85% of the gameplay in The Surge is the same as From’s series but with a sci-fi bent. The Souls that form the currency of that series are ‘Tech’ in The Surge. Campfires, those saving, healing, and respawn points are ‘Medbays’ here. If you’re not careful a single basic enemy can annihilate you even on higher levels, so get a few together or god forbid a tougher character and you’ll have a full game’s worth of stress. Bosses are outlandishly difficult and you’ll have no idea how you can possibly beat one until you do. Die and you’ll drop all your Souls/Tech so you have to make it back to that spot to reacquire it, but die before that and you’ll lose it all, which is made harder by all enemies respawning. 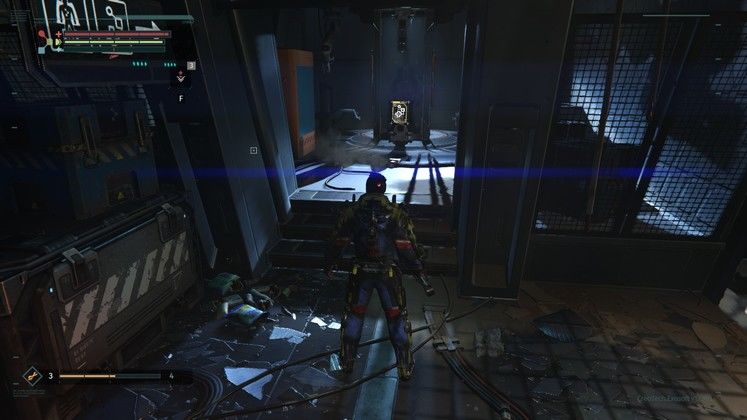 It all sounds sadistic and desperately unfair to someone who’s never played a Souls game, an exercise in humiliation and punishment when games are meant for fun, but the payoff is massive amounts of satisfaction. Sometimes you’ll love every minute you explore, sometimes you’ll make no progress at all and switch the game off in disgust… before trying again an hour later. Furthermore it is still incredibly refreshing how these games don’t nicely lead you down a path and instead allow you to figure the game world out yourself, at your own pace. The Surge, for the most part, manages to recreate all this satisfactorily.

Deck13 have even cleverly introduced a few novel wrinkles into the formula. While melee fighting is still done (on joypads) using the two Right shoulder buttons and you can still focus the camera on an enemy, now you can actually target individual body parts using the right thumbstick – and this is actually encouraged. Attack the legs and it can knock your opponent down, or arms and it might interrupt their attack. Vulnerable unarmoured areas show up in blue, and if you target those points not only do they die quicker but it will open up the opportunity to do a spectacular Finishing Move. This not only looks cool but will give you more Tech and that body part you cut off could be salvaged to create your own gear. I never once picked up a piece of Body Gear, which is annoying as you need it for dark areas, but by targeting the torsos of a few enemies I’d soon salvaged enough to build my own. Which is both nice and adds a lot to combat. 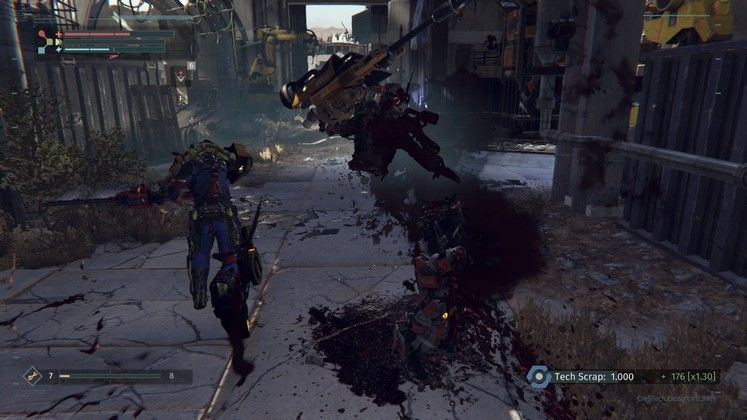 He's half the man I thought he was!

Nevertheless despite all these nice ideas The Surge still falls into the same trap as Lords of the Fallen (which in these games is usually nasty) in that it never feels anything more than a cut price Dark Souls. Every part of it feels a little cheap. That begins right at the start with the inability to customize your character in any way beyond the basic default fighting style, or even choose gender. Considering your character barely talks and is strapped into a machine at all times we’re baffled why there aren’t any customisation options. It’s never that attractive either, with all the levels looking like the same dull, unimaginative future you see in most future-set games, and the enemies barring the default crazed gear suit-wearing humans aren’t exciting either.

One of the great joys of From Software’s games for me is when you enter new areas and you see vast vistas, glorious architecture, and levels which you can keep on finding new secrets in all throughout the game. What Deck13 and many others fail to understand is that the world itself is the best thing about Dark Souls or Bloodborne. It is always dangerous but beautiful, and immense fun to explore. The Surge is not fun to explore. Most of the areas are cramped, there’s little opportunity to branch out in any meaningful way, and you’ll never go “wow, that looks really cool, I’m going to go explore over there now”. The maze-like corridors don’t help either.

Our test machine had specs of an AMD FX-6300 Six-Core Processor, 16 Gb RAM, Nvidia GTX 1050 Ti 4Gb, and Windows 10 64-Bit and it gave us maximum settings with 60FPS no problem. It’s not too demanding a game really so there shouldn’t be any problems for most people, and we personally did not encounter any actual bugs beyond an enemy trying to attack us through a wall. Loading times were fast as well, which is always a blessing especially in these types of games. There was a decent range of options, for sure (see below). 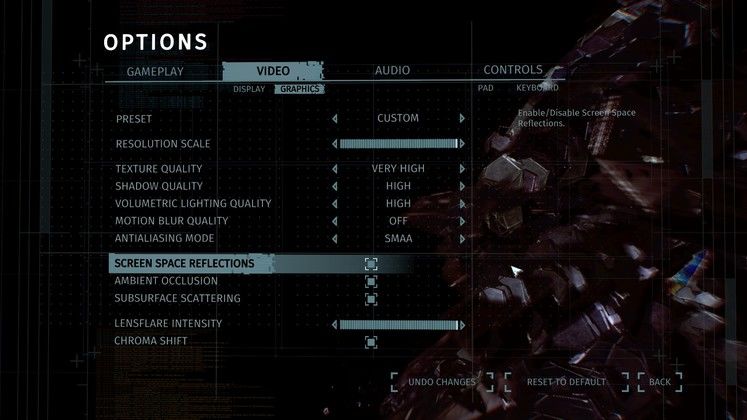 Graphically everything looks generally nice with plenty of fun graphical effects to play about with, but the generally drabness of the design and the cramped areas ensure that nothing ever looks too spectacular. It’s colourful at least, just dull.

Deck13 have, for a second time, set themselves up for a fall. If you have never played a Souls-type game, either due to ignorance or not wanting to, you should not start with The Surge since any one of the Dark Souls trilogy are far better. Consequently The Surge is meant for Souls veterans only who are looking for a new game… and yet they’ll be the ones most critical of it. If they only like the combat and challenge of the Souls series they might just like The Surge, but anyone who values the world, the exploration, the creatures and the overall careful design of the Souls games will hate it.

Oh, and you know how when you die in these games you drop your resource and have to battle your way back to collect it? In The Surge for no reason at all other than being pains in the ass Deck13 have added a (far too short) time limit. If it runs out, your Tech is gone forever. Half the time I couldn’t be bothered, since even running it would often take me longer than the time limit to reach it. 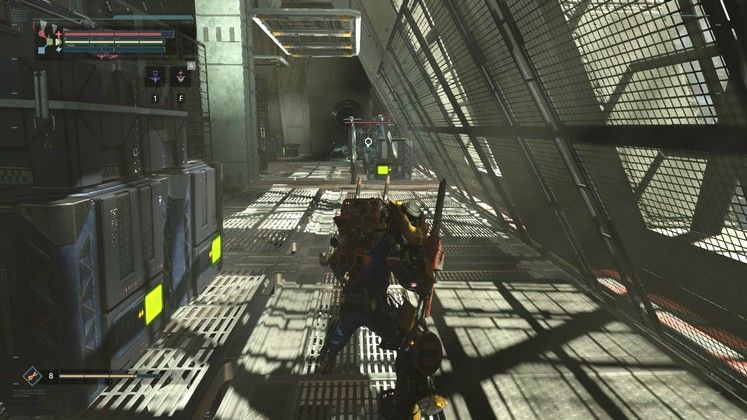 That box is going to kill me.

Finally we want to emphasize the point we made earlier about maze-like design. We really mean that. Every area and every corridor looks the same, with no guidance (stated or subtle) on where you need to go. I got lost on the first chapter, which you’ll spend several hours on, because after discovering the whole map is one big circle the game doesn’t inform you that there’s a particular part you have to revisit in order to trigger the boss and finish the chapter. Because of all the shortcuts, which are normally good things, we spent a good hour bypassing the boss area entirely and searching in the wrong location for what to do next. It was quite a surprise and an annoyance when purely by chance we wandered into the right location and a giant mech leapt out of the floor.

Like Deck13’s previous game Lords of the Fallen, The Surge is defiantly inspired by the Dark Souls series and wears its influence on its sleeve. It gets the general formula right, especially regarding difficulty and combat, and then it adds new ideas to make things feel fresh. The futuristic sci-fi world is a welcome change from dark fantasy, and the limb-targeting function makes combat more exciting, more visceral, and allows access to better gear. Clever.

Unfortunately while it gets the mechanics right the overall design is a far cry from Dark Souls. The world itself is plain, unimaginative and uninteresting. The level design is cramped and maze-like. The enemies are mostly stock sci-fi robots which aren’t that fun to defeat. If you’re desperate for a new Souls-style game and like the idea of the sci-fi setting, set your expectations low and you could totally enjoy The Surge. We on the other hand got bored of it very quickly, and we can imagine a lot of gamers feeling the same way. Shame.