Always be yourself, unless you can be a Ranger. Then always be a Ranger 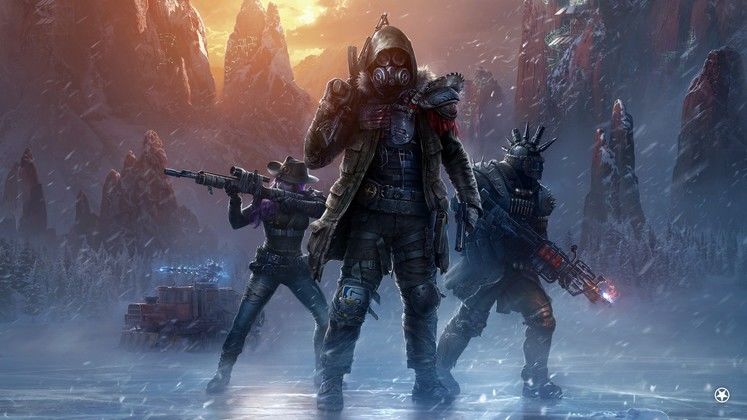 I didn’t like Wasteland 2. Nothing against the game or its quality, mind you – for some reason I just couldn’t click with it after several hours of trying. Wasteland 3 was the exact opposite – within the first 5 minutes of character creation and tutorial, I was into it. By the end of the prologue, I was hooked. Fast forward 50 hours, and I like it a lot more than I did Wasteland 2.

The sequel to 2014’s RPG abandons the deserts of Arizona for the frozen wastelands of Colorado, 100 years after a nuclear apocalypse turned the world into a shadow of its former self. Denver and Colorado Springs are now perpetually covered in snow and kept together by someone called “The Patriarch”, which sends the Desert Rangers a request for help in exchange for supplies to keep Arizona alive. With little choice, the Rangers make their way to Colorado and start looking for the Patriarch’s crazed children who are trying to usurp their father. 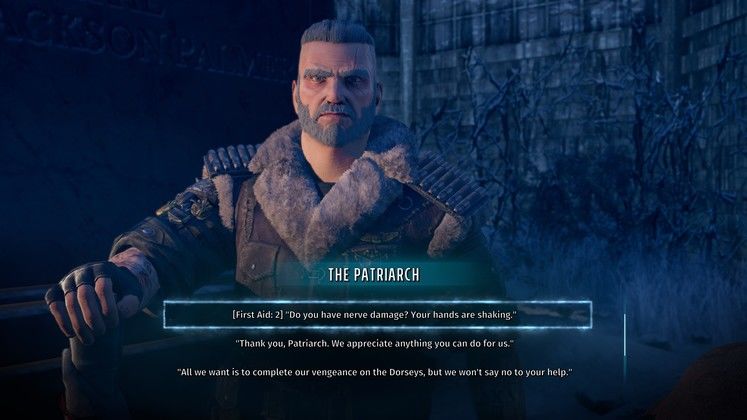 The game starts with an ambush, right after you either choose a duo of premade Rangers or create your own from scratch. With your characters as the now highest-ranking Rangers in Colorado, the Patriarch gives you an old military base near Colorado Springs to be used as the Ranger HQ (no, it isn’t NORAD) and places you in charge of the organisation.

With a squad of up to 6 people – max of 4 user created/premade Rangers and 2 or more voiced characters – you go around the world solving problems (or creating them) and getting into firefights in the now frozen tundra that is Colorado. The first bit of business is to head into Colorado Springs to help the Marshals deal with the fallout of a recent attack, but the game actually lets you go wherever you want at this point. 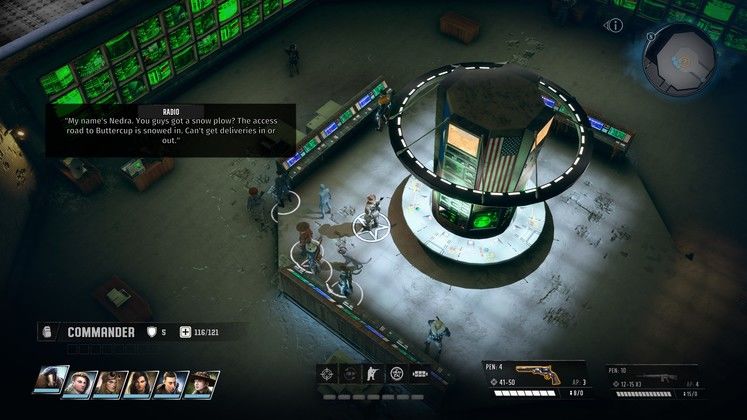 The bit that first hooked me in Wastelands 3 was threefold – base management, vehicle driving, and combat. The former – while not as involved and deep as I would like – means you not only do the typical levelling up of your party like most RPGs, but also need to staff the place with a doctor, armory officer, mechanic, and even a museum curator and brig jailer.

Driving was also less involved than I would like, mainly translating as the same click-and-move gameplay of the rest of the game, but in a world map instead of a level. Wastelands 3 has a few big locations scattered around – Denver, Colorado Springs, and Aspen, to name a few (and not including the Bizarre bazaar) – populated by other smaller locations and world encounters along the way. It’s a big and very atmospheric world map, full of blizzards and lightning strikes that will make you want to cuddle up to a floor heater, but not exactly intriguing when moving from A to B. 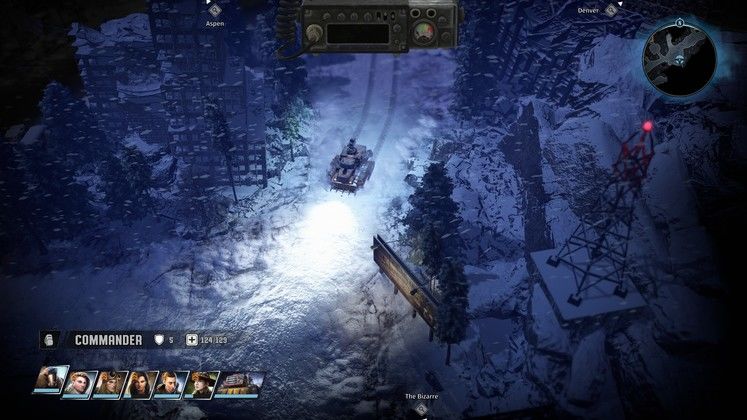 But the cool thing about driving the car is that you can shoot people with it. Thanks to an AI and a massive upgradeable roof cannon, the big ass jeep used by the Rangers to move around can also fire very precise shots and even AoE attacks. The car can help turn the tide of the battle in a splitsecond, but it obviously can’t be used inside settlements or buildings.

Luckily, the jeep isn’t always necessary, since Wastelands 3 has the best turn-based combat this side of XCOM. In fact, the combat is very similar to XCOM’s, down to the blue and orange moves, the full and half cover objects, and the hit chances that make you want to punch a nearby wall. XCOM is hands-down one of my favourite games of all time, and I’ve seen so many titles try to (badly) emulate its engagements that it is genuinely refreshing when one gets it right. 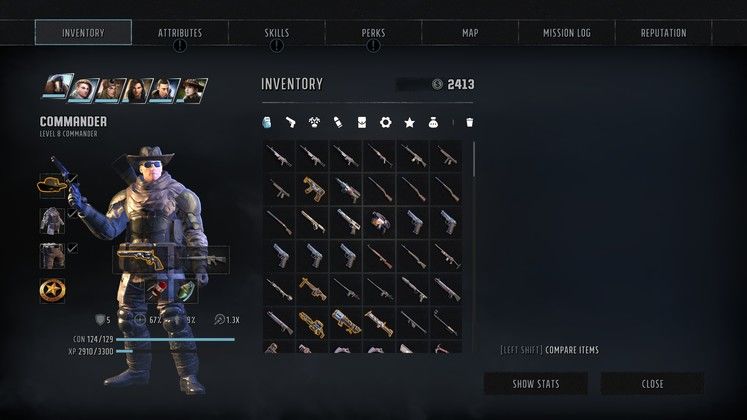 Battles are divided into three recurring turns – yours, the enemy’s, and friendlies. Soldiers can be moved in any order in your turn, allowing you to tackle the situation from any angle and combo abilities and shots in a way that interleaved turns would simply make impossible. InXile Entertainment actually makes a few improvements to its inspiration, such as the little aiming lines that preview who you can target once you move to a new spot (complete with updated hit chances).

While the uncertainty of combat makes complete sense in XCOM 1 and 2, an RPG does benefit from having that info on the screen – especially given how arbitrary Wastelands 3 is with those hit chances in the first place; I had several instances where moving a character up to 9 tiles around resulted in exactly zero change to the percentage, and interestingly, taking cover always ups the aim for 10% (I guess it reflects that bracing the weapon against the surface helps with stabilisation). 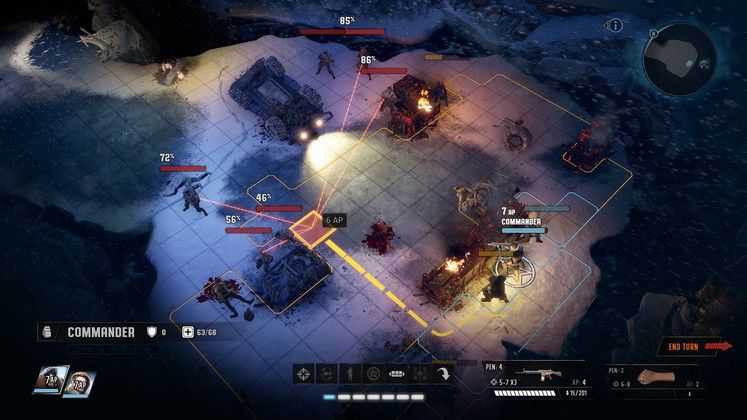 Aside from featuring a big variety of assault and sniper rifles, SMGs, pistols, revolvers, melee weapons, rocket launchers, light and heavy machine guns, and several energy weapon versions of all of those, battles can also be influenced by the abilities your character possess. Levelling up gives you attribute and skill points – the former used for things like Intelligence and Luck and the later used for anything from weapon proficiency to Animal Whispering and Toaster Repair – as well as perk points, which allow you to pick special passive and active abilities from relevant skill trees. My main character – a custom Commander type – can boost the whole party hit chances just by being near them and can replenish APs or debuff enemies in the middle of the fight, while my shotgunner lady can straight up obliterate half a dozen people with a well aimed cone of death from her pump action.

But more important for true RPG fans, all that stat and perk taking actually reflects in the way you play the game. Virtually every NPC is voiced, and at least two-thirds of all conversations include at least one skill-dependent option that opens new doors or information, and your choices actually matter. In one instance I had to accidentally replay because of a bug, the simple act of waiting for two NPCs to finish a scripted dialogue resulted in changes to my interaction. 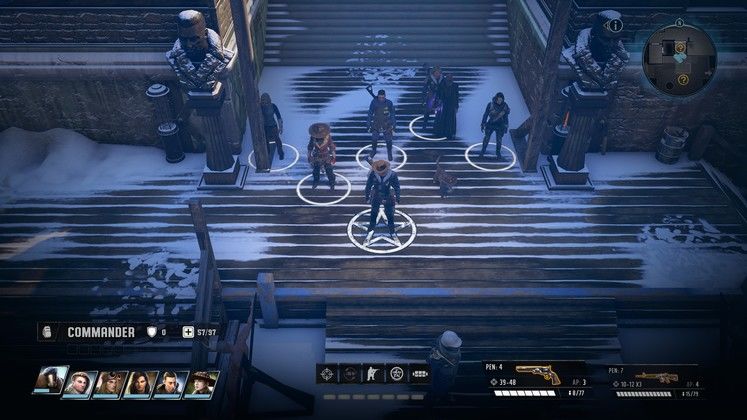 Luckily, most quests also seem to have multiple endpoints and ways to solve them, and some of them end up creating consequences down the road. You’re even free to arrest or kill most bosses, leading to an interesting moral point about who deserves to live or die based on your own personal ethics, and the effect that has on Colorado through the game’s Fame and Reputation system that changes how much people like or dislike you.

While Wasteland 3 vastly changes in spots to the point it needs to be replayed a few times to see all outcomes, it isn’t all roses. My biggest disappointment is a battle in a nightclub which starts off with an option to solve it peacefully but completely removes it if you decide to have a conversation first. The game presents you with an “arrest” option before you interrogate the person to find out if they’re actually guilty, and once you do talk to them about it, the game forces you into a choice of killing them or accepting their blackmail. I literally had the option to arrest them 2 seconds before due to a trap yet not sprung, so the situation you created beforehand to lead to their arrest becomes pointless – the “arrest” choice apparently appears 3 dialogue nodes before it should, and as result it derails the sequence badly. It forced me to reload in order to not have a super hard fight against someone I did not want to kill, and it felt extremely cheap to have to do so. 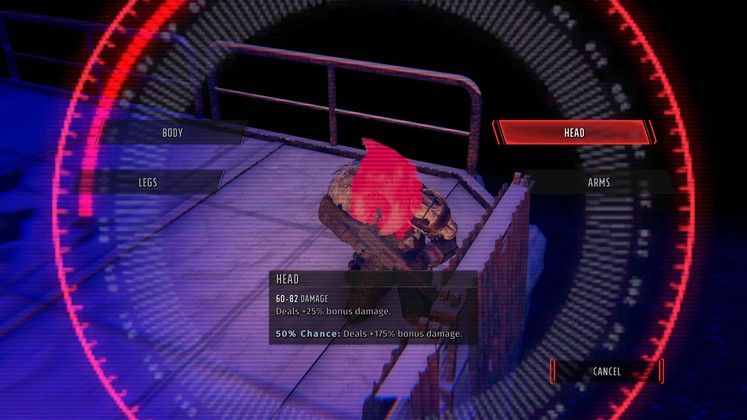 The game also has a fair number of bugs at this early stage, including keypresses not registering to skip dialogue, items out of bounds, and buggy pathfinding to interactables. It also has a bit of issue with performance, freezing in some dialogues for no apparent reason as if it was somehow loading the dialogue text options and straight up stuttering if you hold SHIFT to highlight world items in populated areas, as well as some noticeably long loading times of up to a minute on an SSD, but these are all usually fixed by post-launch patches.

One very important aspect of Wastelands 3 hitherto unmentioned is its charm. The game’s art style, graphics, and colour palette really work in its favour, and the opening is a beautiful juxtaposition of the cold-ice blue of the frozen landscape and the red-hot orange fires caused by the ambush. The very first boss fight is accompanied by an amazing rendition of “Washed In The Blood of The Lamb” by Joshua James, and most important fights afterward have either a great song or original score attached to it making it extra memorable (as an interesting tidbit, Quentin Tarantino’s song hunter Mary Ramos is apparently responsible for finding these songs for the game according to Brian Fargo) 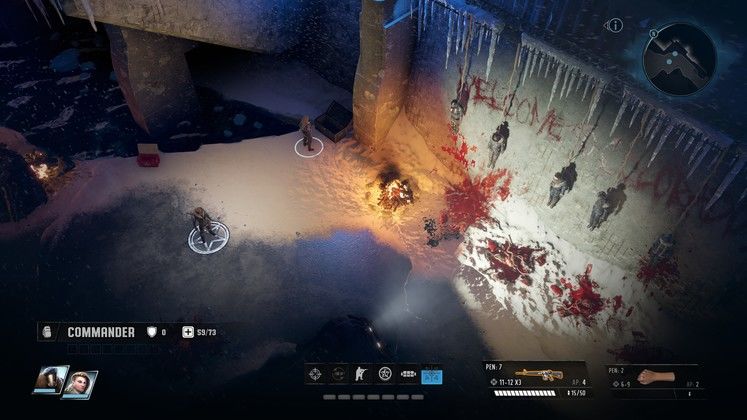 One unexpected thing that really bothers me is that Wastelands 3 never seems to pause. While the game has turn-based combat, inventory screens, and an Escape menu, it keeps running at all times, meaning pausing the game in a city doesn’t stop the NPCs from walking around, your characters from talking, and the autosave from counting. Several times I had to stop in the middle of a session for a few minutes, and I came back to mid-conversations between characters and a slew of autosave notifications making up for the multiple 5-minute loops I lost while I was away for a bit. Similarly, if you give a character a move order and go into the inventory, you will find they reached their destination by the time you come out of the menu.

While I’m not sure what impact it has on the gameplay aside from you missing some of the amazing conversations, I would prefer it if at least the pause button actually paused the game for the situations where real life simply has to drag the player away for a few moments. The reason for that is, quite simply, because the dialogue is amazing. It’s informative yet non-expository, natural but witty, and occasionally humorous – or darkly humorous. Good writing is really rare these days in the industry, so missing the little bit we get is always going to bother me to some extent.

Those small issues aside, Wastelands 3 is a really good game and a worthy successor of Wastelands 2. While I didn’t like that one, I recognised its extreme qualities as an RPG, and I’m quite glad the third one managed to hook me when the second one didn’t. If you’re a fan of tactical games, RPGs, or have been burned out by them recently and need a great game to restore your faith in the genre, Wastelands 3 is definitely worth a shot.

A fantastic RPG that superbly mixes player choice and great combat to create something bigger than the sum of its parts.

Any boss fight with a song, really.