If you planned on purchasing Obsidian's 2010 spy RPG, Alpha Protocol, you'll find yourself unable to as publisher Sega has removed it from sale.

According to Obsidian CEO Feargus Urquhart, the studio can't make a sequel to cult favourite spy RPG Alpha Protocol because they were forced to sell the IP because of Disney.

Obsidian Entertainment is one of the biggest, longest-lasting independent studios in the games industry. The produced big sequels in the forms of Knights of the Old Republic II, Neverwinter Nights 2, and Fallout: New Vegas, along with original tiles like Alpha Protocol and licensed RPGs like South Park: The Stick of Truth. The crowdfunded success of Pillars of Eternity have presented a new future for the company, and in a recent interview CEO Feargus Urquhart reflected on the company’s 13-year history.

Obsidian "continue to call up" publishers for RPGs, "any opportunity" for Star Wars

A Skyrim-sized RPG from Obsidian Entertainment? Co-founder Feargus Urquhart would love that kind of project, and it's why publishers continue 'making sense' for those types of games as they cost tens of millions.

Pillars of Eternity developer Obsidian Entertainment has a "next generation game" project in the works, according to a job ad for a 'Junior/Intermediate UI Artist', and requires experience on a AAA title.

Obsidian has teased they're working on a licensed property and are looking to Kickstarter again for approval. It will not be Alpha Protocol 2, that much is sure. 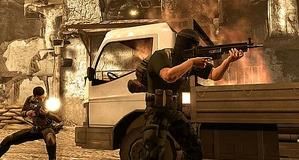