There's doings afoot. Square Enix has filed the paperwork to register more trademarks for Eidos properties Deus Ex and Hitman. Their names are open to significant interpretation to our delight/despair.

Hitman Sniper for instance sounds like a continuation of the surprising hit (get it?) that Sniper Challenge proved, which was just fancy marketing for Hitman: Absolution.

Hitman: Sniper Challenge and Bejeweled-like RPG Gyromancer are the latest additions. These can be played through the browser for up to 20 minutes per day, with advertisements.

Hitman: Sniper Challenge may be the most effective pre-order bonus of all time. Used to promote the upcoming release of Hitman: Absolution, IO Interactive has expressed an interest in making a standalone title for the game.

An Italian retailer lists Hitman 2: Silent Assassin, Hitman 3: Contracts and Hitman: Blood Money as part of a Hitman HD Collection for the PlayStation 3. It's out this October 15th, they say.

Those three Hitman titles are the 2nd, 3rd and 4th in the franchise. Hitman: Absolution releases November 20th. Are Eidos and Square Enix preparing a HD bundle for the bald guy? 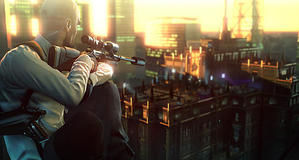