Developer Rebellion confirms that Sniper Elite's mulitplayer servers through Gamespy are no longer running, but not by a decision reached themselves. GLU Mobile pulled the plug 'without consultation'.

The studio had been paying the third-party so Sniper Elite fans could "play online for free," which they've been doing for the past seven years. GLU have targetted other older titles too, like SWAT 4. 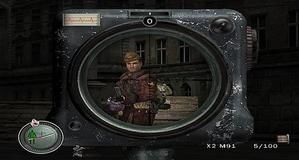