It's been a good couple of weeks for record-breaking game runs. Spelunky player YamaYamaDingDong has set a new world record final score of $3,109,850, in a run timed at four hours and 45 minutes.

The Steam and GoG.com version of Spelunky, which is based on the Xbox Live Arcade version of the original Flash game, will be getting a daily challenge.

The re-release of Spelunky with all-new graphics and enemies to best will be out August 8th, announces the official Tumblr. It'll be available via Steam as well as GOG.com for that DRM-free experience.

Spelunky coming to digital distribution on PC this Summer

Already a free-to-play Flash game, Spelunky will be released this Summer on Steam and other digital distribution services. The probable advantages to getting a release version are user-created levels. 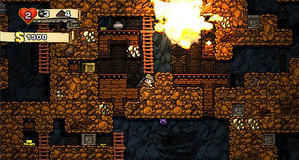