If one is to be honest, compared to it’s desktop-based big brother, the Xbox 360 version of Supreme Commander is but a shadow of its former self.. 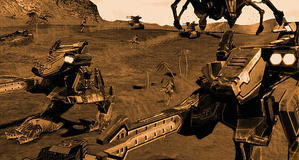