Get ready to unleash ultimate firepower upon the world arena. This mod makes a new faction available in the form of the Atlas General. The Atlas army has access to units and firepower similar to, but technologically advanced over the Boss General. As an aside you'll also be able to play as the Boss General with this mod. Take these two mighty forces to Skirmish or Multiplayer and lay waste to foes with over 3000 unit tweaks and balance changes in this comprehensive faction mod. 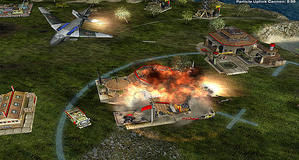