The Nirraein Mesa is a series of canyons and bluffs rich in resources. It would make a fine prize for any faction that could conquer it. You take up one of six outposts situated between two opposing Imperial forces. Band together with your allies and seize the glory and honor of overtaking the Mesa for yourself and the Empire! 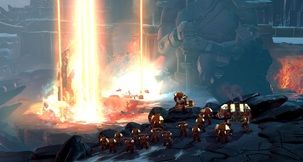 Why Dawn of War III Failed, According To Relic