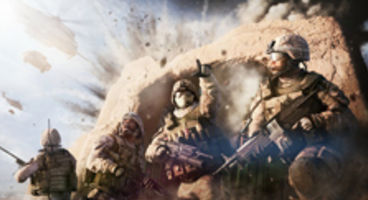 To avoid the "congested period" of the holiday when most retail shooters, Codemasters looks to the "1st April and the end of June" period instead.

Operation Flashpoint: Red River and racer Colin McRae: DiRT 3 will be releasing in Q2 2011, to avoid the "heavyweights". Grid sequel not until 2012.

"I don't think it does any good to publish in a congested period when everyone's putting out their shooters," said Codemasters CEO Rod Cousens.

"A number of leading companies have their fiscal year ends around that time, and so they'll be firing heavyweights in terms of their product releases to give as much boost to their fiscal year end as they possibly can," he continued. "That's not a window I want to go out in. It will be between 1st April and the end of June."

Operation Flashpoint: Red River will be joined by Colin McRae: DiRT 3 in the same schedule window, but Race Driver: Grid 2 will be aways off in 2012.

"What we're not going to do is do more of the same with each rendition of the game," Cousens promised on the DiRT series. "There is a lot more to it."

"Let's put it into context. It's from probably the finest racing studio in the world. It's between us and the Need for Speed guys, and I would argue we're better." I hope you're not counting Criterion there, as intial reviews for Need for Speed: Hot Pursuit are 90+.

"We're not difficult to predict," Cousens said. "If DiRT comes out next year, GRID will come out the following year, and then DiRT will be out the year after that. So you can map us out."

"Sitting alongside that will be F1 every year. Flashpoint we'll do every other year. The idea is to come up with a new IP that sits in opposite years to each other, but we're in the racing segment and the action segment. So you can pretty much lay out my business plan for the next five years." New Codemasters IP in 2012? "Could well be," he teased.