Biomutant Mutations - How to Unlock Light and Dark Psi-Power Abilities 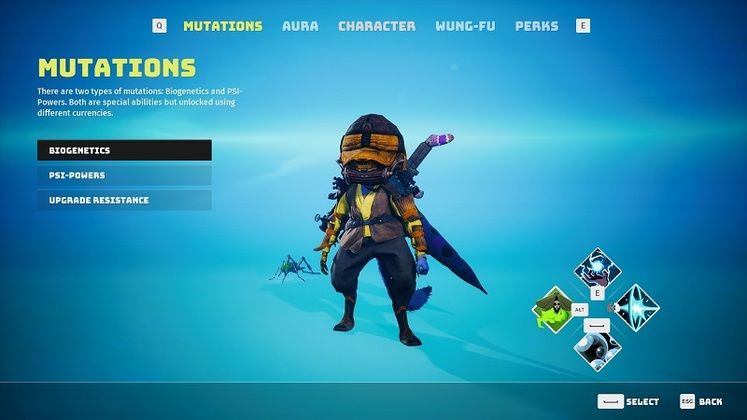 Biomutant's combat shines thanks to its flexibility and Mutations act as an important part of it, complementing the makeshift ranged and melee weapons you also bring to fights. As you level up and explore the world, you can unlock a handful of different abilities, including some fairly potent Light and Dark Psi-Powers, that let you obliterate furry foes in style.

You cannot access all of Biomutant's Mutations right away and need to gain two different currencies if you plan on getting a taste of everything it has to offer. In their associated menu, you'll see three options: Biogenetics, Psi-Powers, and Resistances. Since we've already covered Resistances, this guide will focus on just the first two. 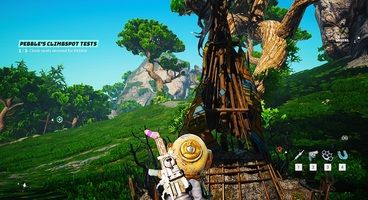 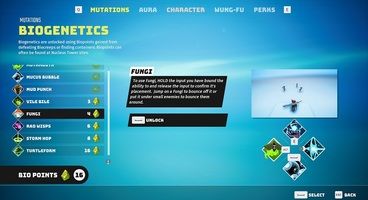 You can only unlock Biogenetic abilities using Bio Points, a currency obtained from special containers found in the world. They're cylindrical in shape and can be identified by the green glow and smoke emanating from them. On top of this, you can also gain Bio Points by defeating Biocreep enemies, such as the Morks found underground in heavily radioactive areas, and when leveling up.

These same areas offer Mutation spots that let you change your character's appearance, also at the cost of Bio Points, without altering your stats. In case you forgot, during character creation, your character's body morphs based on the primary stat you assign it.

Psi-Powers are a different category of Biomutant Mutations, unlocked using Psi-Points. You gain Psi-Points from shrines like the one pictured above, as well as rescuing captives. Shrines can be quite tricky to track down, but you can find some around tribal outposts and near the locations where some characters relevant to the main story hang out.

As opposed to Biogenetics powers, some of Biomutant's Psi-Powers are also tied to a certain amount of Dark or Light aura. Even if you have enough Psi-Points for them, not fulfilling the alignment requirement will lock you out of accessing them.

Luckily, performing Dark deeds doesn't stop you from changing your mind later on, which means that you can, potentially, get enough points to unlock all these gated Psi-Powers. If you want to roleplay as either a Dark or Light character, you can unlock the other set of Psi-Power in New Game+. Here's the full list:

Regardless of how many of Biomutant's Mutations you unlock, you can assign up to four to a set of dedicated buttons that act as shortcuts. You can mix and match between Biogenetics abilities and Psi-Powers, but if you're looking to change something in your build, you'll have to dip into the menu and reassign things.

For more on Biomutant, check out our guide on Tribes and choosing between Jagni and Myriad.