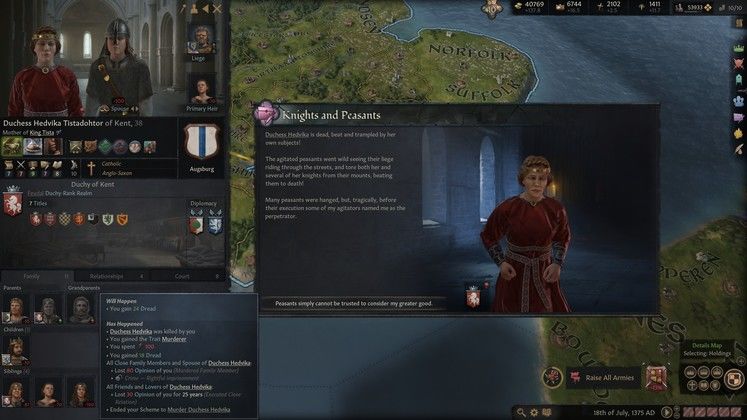 Intrigue is rarely made full use of, but this Crusader Kings 3 guide will walk you through the shady backrooms of your keep and the slightly less shady alleys of your Realm as you learn how to plot and Hook characters.

This use of Schemes and Secrets might not make you a good ruler, but it will make you better at staying alive long enough to become one. 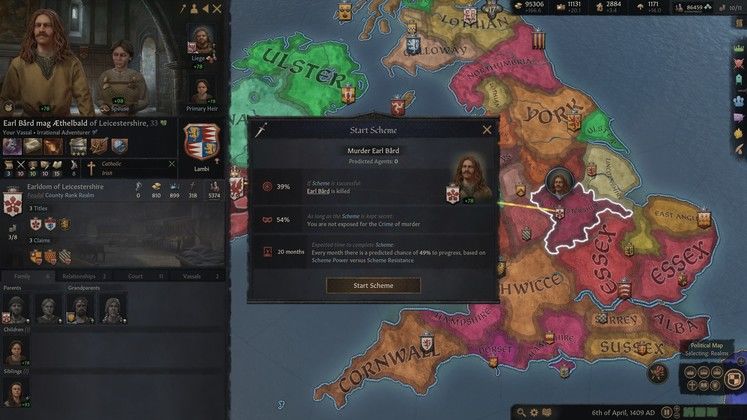 The first taste of Intrigue comes in the form of Schemes and are divided into two categories, Hostile and Personal - basically nasty and nice respectively. Every Scheme has a power, every target has a resistance, both made up of their own skills plus their Spymasters. Schemes can progress once per month and the chance of this occurring is based on the power vs resistance along with any other factors listed below.

Note: Scheme Power is not the same as Success Chance. Power is what moves the Scheme along (the planning stage), but Success Chance is how likely it is to succeed when it does trigger.

Every character has a basic set of Schemes available without any Perks or further requirements. Sway and Murder is also likely to remain the most commonly used even if you choose to specialise. 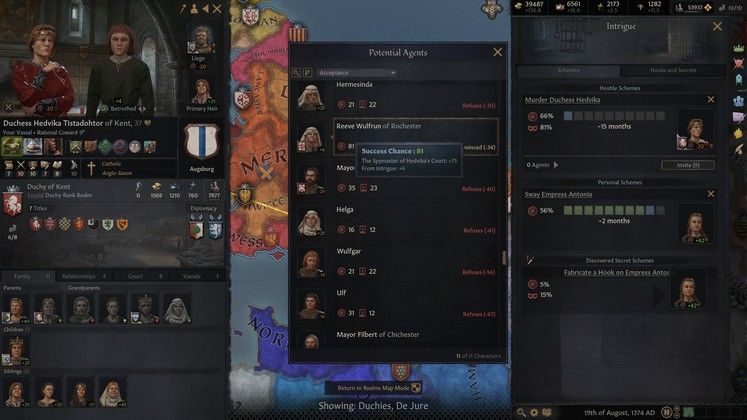 As we've seen above, some of the Hostile Schemes can make use of Agents while Personal Schemes never can. These Agents are made up of those close to your target and increase the Success Chance depending on their proximity and position.

Agents may join you if they also dislike the target although most will require some persuasion. This is done through the Intrigue tab under the targets portrait. The Invite button shows you how many will be willing to join the attempt and once clicked will open the Potential Agents window.

Here you will see a list of characters sorted by default by how much they would add to your Success Chance. You also see their Scheme Power here. Be sure to remember what we went over before though:

Clicking on their nameplates will give you the option to Bribe or Use a Hook to bring them into the plot. Once recruited, Agents will remain working for you for 5 years and we have seen the same Agents used in multiple Schemes without need to recruit them a second time.

Agents can be discovered during the planning stage and if this occurs, the target will get increased resistance which slows down the progress speed. If the Scheme itself is discovered, it receives a -75% Success Chance, and although it might be worth seeing it through to the end, it usually spells the end of the attempt. Be warned that abandoning the Scheme will cause a 10 year cooldown though. 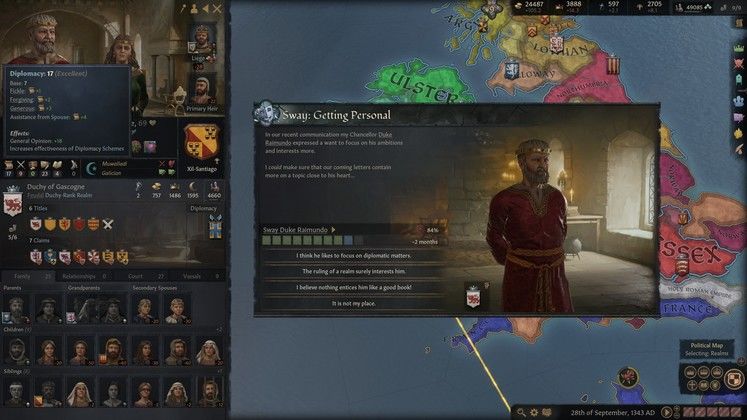 As progress is made through the stages of a Scheme, events can happen to either speed or slow the progress, or even let the cat out of the bag altogether. These events can be as simple as choosing between spending a lot, a little, or none at all, while others factor in a lot of different variables based on the type of plot. Most will benefit from being considered carefully and not quickly clicked away.

For example, some events will ask you what you should talk about with the target out of three possible options. For your best chance of a positive result you should check the target's profile and what Traits they have. Use this information to predict what they would most like to hear. For example, a target with martial Traits is more likely to want to discuss war than statecraft. 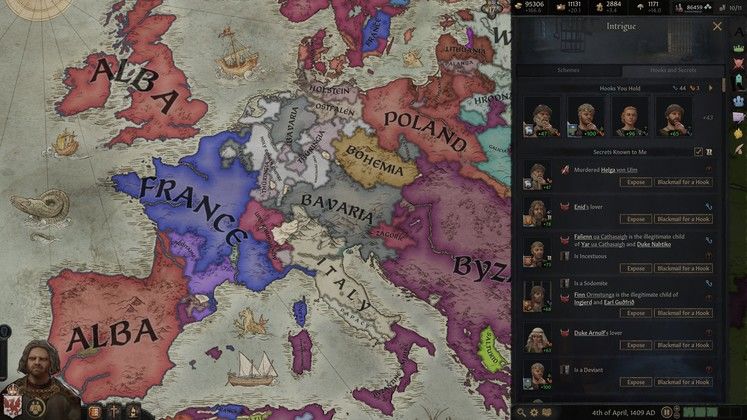 Secrets are created when a character does something morally or legally wrong and then remain hidden unless discovered. Secrets can be discovered through random events but they are more readily available through the Find Secret Council action. Secrets on their own are worth nothing, but once you are in possession of one you have two choices.

You can either Expose the Secret to the world, which adds a Trait to the character and affects how others see them or Blackmail them for a Hook. If the Blackmail doesn't work the secret will then be exposed - although certain Traits let you back off and keep their secret. 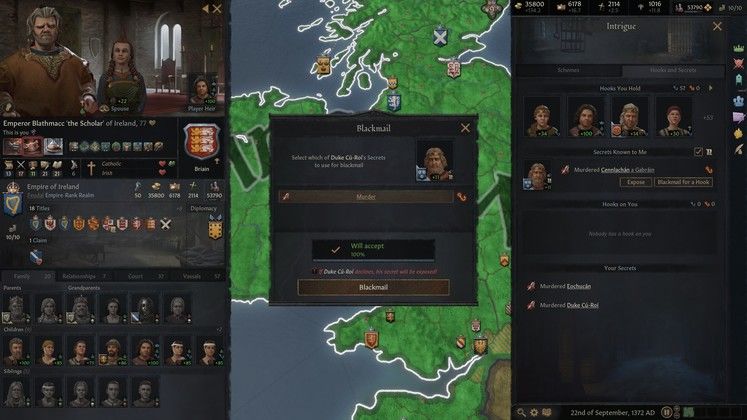 If the Secret was merely Shunned (morally wrong) then you will gain a Weak Hook on the target, whereas a Criminal Secret will give you a Strong Hook. Much of the difference here comes down to the Doctrines in your religion.

Weak Hooks are limited to a single use, and Strong Hooks can be used repeatedly until they expire. Strong Hooks also prevent the target from taking hostile actions against the holder.

These Hooks can then be used for multiple purposes to coerce a target or even just extort them for gold. 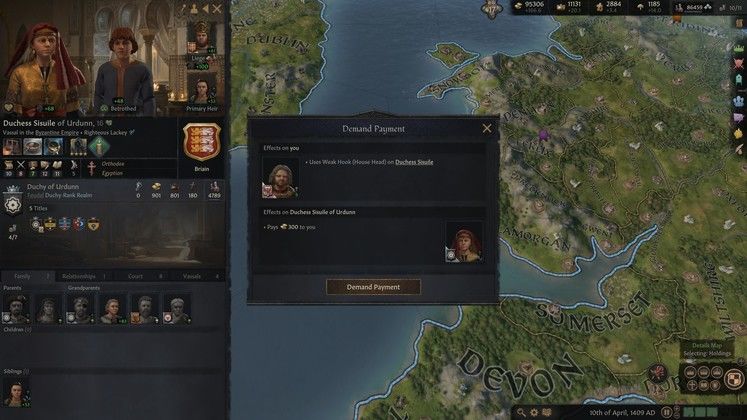 Lifestyle - The Intrigue Lifestyle has a lot to offer to players looking to put an edge on their daggers. Going through the Schemer Perks you get access to all the Hostile Schemes and enjoy a large boost to your Power and Success chances for everything. It also makes you a harder target for retaliation and gives you the ability to run two Hostile schemes at the same time.

Find Secrets - If you're having trouble dealing with unruly Vassals, setting your Spymaster to search your Realm for Secrets will often uncover plenty of reasons to imprison them and after all, an imprisoned Vassal is a helpless Vassal meaning they will not be able to join Factions against you.

Always be Swaying - If you have no other Personal Schemes to attend to, make sure you're using that slot to improve the relations with various Vassals. It is especially useful when you have a Realm Priest who is negative to you as in most religions they control a large amount of Taxes and troops and while they won't rise against you, them declining their support can push a Faction strength over the threshold very easily.

Golden Obligations - Up to 300 gold per Hook. If you have a fairly stable Realm, you can sell off a lot of your Hooks for some useful shiny gold. In many ways this is a better use than simply increasing the demands on a Feudal Contract as it would take a generation to earn as much money from Taxes, all while having the negative opinion for doing so.