It’s not a new type of shooter, but it’s a new standard of excellence

Everything about Overwatch is an absolute joy. Blizzard hasn’t reinvented the team-based shooter–the comparisons to Team Fortress 2 in particular are obvious–but there’s a personality and vivacity to the game that makes it feel fresh and exciting. That personality isn’t just in the Pixar-inspired character designs of the 21 super-powered heroes, but in the feel of the movement and the pace of the matches.

It’s not a new type of shooter, but it’s a new standard of excellence.

You play as part of a team of six, tasked with either capturing or defending objectives tied to the current map. A balanced team composition is essential, because it’s incredibly easy to take advantage of a hole in the opposition’s lineup. The enemy can push right past you if there isn’t a tank to hold the line. You’ll never push forward if you don’t have serious damage-dealers taking down the opponents. 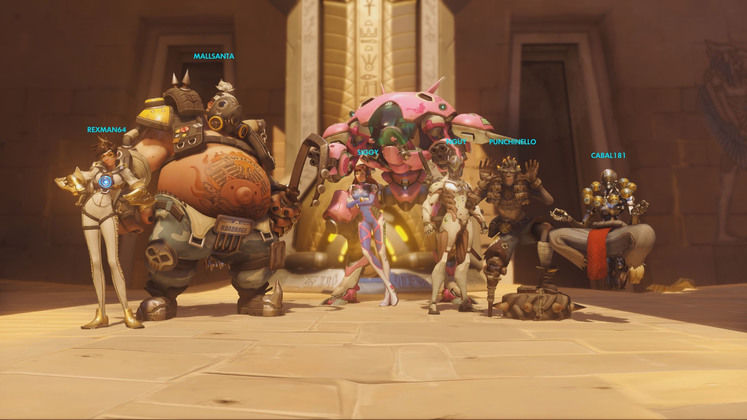 Say hello to the heroes of Overwatch

Characters are separated into four categories: offense, defense, tank, and support. While those categories offer a general idea of what each character does, they’re not interchangable. Reinhardt is an obvious tank, with a massive shield that can soak up damage as he slowly moves forward and provides cover for his team. But if you try wading forward into the action as Winston, another tank character, you’ll get ripped to shreds, as he has to keep moving, jumping around, and disrupting the enemy group. While they both fulfill the same role of soaking enemy fire, they do it in completely different ways. 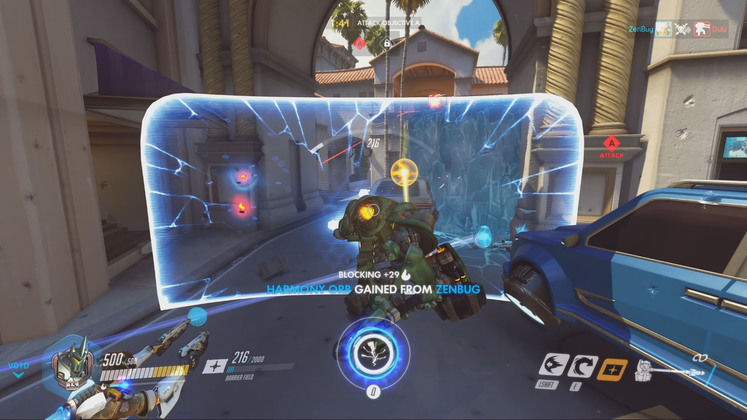 Reinhardt's shield can mitigate a lot of damage

But then the tanks have counters. A couple of well-placed sniper shots from Hanzo or Widowmaker will drop even the mightiest foe–unless, of course, they’re getting distracted by stealthy skirmishers like Tracer and Reaper. Add into the mix support characters offering shields and healing to their teammates, and you’ve got a battlefield where the situation is constantly evolving, and you’ve got to change your playstyle to suit it. Sometimes that means varying your tactics. Sometimes that means switching characters entirely. 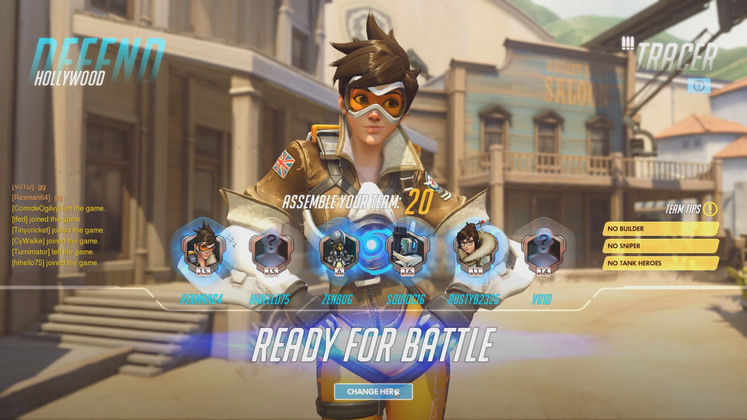 And every character is fun to play. Each has basic attacks and a few specific abilities that recharge over time, as well as an ultimate ability that charges up as you fulfill your role–dealing damage as an offensive character or healing as a support. Some of those abilities are about hurting the enemy, some are about protecting your team, and some are simply about moving around the map. Soldier 76, the most seemingly generic shooty-guy on the roster, actually has all three, with a mini-rocket launcher, an area-of-effect heal, and a sprint that lets him get to the front lines quickly. 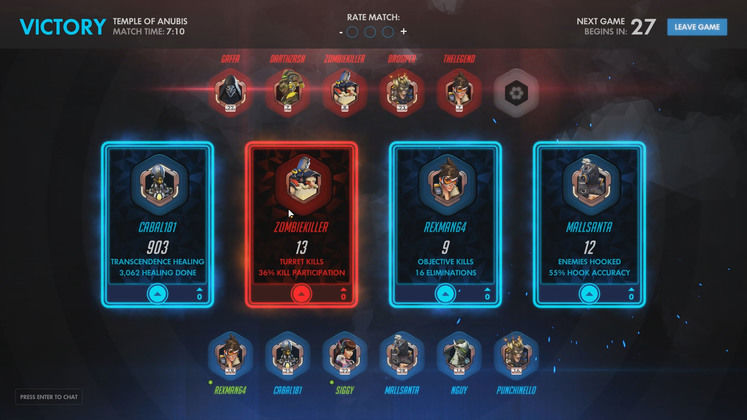 These abilities ensure that all the characters feel completely different from one another and their effects on mobility and damage output make every match a fast-paced guessing game that can swing around completely at any moment. You might have a point well-defended until D.Va sends and exploding mech your way or Junkrat drops an exploding tire on your team’s collective heads. But then maybe you’ve got a Lucio ready to pop some big shields, or a Mercy with a resurrection ult standing by to bring back the entire team. The entire team has to be aware of what the enemy is capable of, and what they’re capable of doing to counter it.

Of course, a well-coordinated team is going to clean up the opposition, but the character balance is so well-considered that, with some experience, it’s easy to intuit how the match is going and where your abilities would be best suited. Overwatch is incredibly accessible, and while playing and vocally communicating with your own team is the ideal way to play, just hopping into quick play matches is a ton of fun, too. 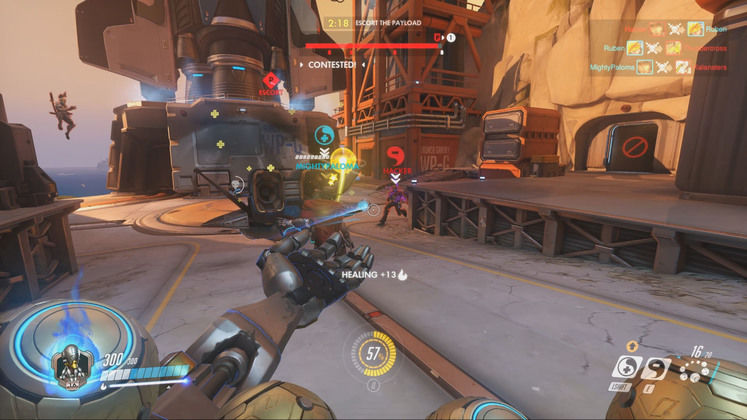 Even the supports are a lot of fun to play

I’m just gushing about the game at this point, but there are some specific flaws. There aren’t a lot of maps. Modes are tied directly to the maps themselves, and while the maps are designed very specifically to support their objective types, there isn’t a lot of variety to those objectives. You’ll either try to control a neutral objective, control an enemy-held objective, or escort a payload to its destination, and the only variation on those is whether you’re on attack or defense on that given map. Right now, defensive turret-based characters seem very powerful, and while there are certainly counters against a well-defended Bastion, they’re counters that often require somebody on the team to drop their current role and switch to a character specifically equipped to deal with that situation.

But those are minor points against a game that is so polished, so engaging, and so much fun to play. Right now all I want to do is finish this review so that I can go back and play more of it. Will it have the legs that games like Team Fortress and Counter-Strike have had? No idea, but Blizzard certainly has an impressive track record when it comes to supporting their games over time. For now, though, I can say that this is the most fun I’ve had with a shooter in years, and if you’ve got even a passing interest in team-based shooting, you should absolutely be playing it. 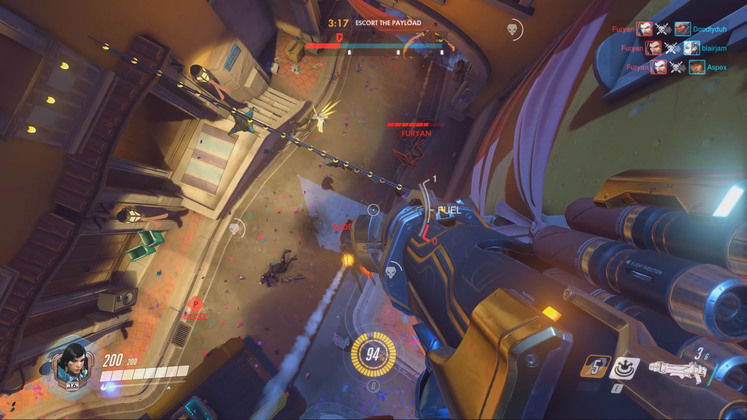 It’s a sharp-looking game, but it owes those good looks to great art design rather than fancy technical effects. It runs at a rock-solid 60FPS with a GTX 960 on high-to-ultra settings, and still looks great even with options set to minimum. If you’ve got a relatively modern machine, you shouldn’t have a problem.

Overwatch is a fantastic game from top to bottom. The relatively small map selection does little to detract from a game where every character is fun, unique, and important, and every fight is a dynamic, constantly evolving game of battlefield control.

Getting Play of the Game. Always satisfying, no matter who you’re playing as or how you got there.