First up, a confession: I don’t usually get on with more realistic driving games. Stick me in front of Forza 2 for ten minutes and I’ll repeatedly smash into the other cars while hitting the A button and wondering why my boost isn’t firing. Give me another ten minutes after that, and I might just have begun to figure out that I’m supposed to brake BEFORE the corners, instead of going in at full speed and trying to drift all the way around – and hey, if that fails, I can just smack straight into a wall, wreck my car, and respawn on the track a moment later, right?

That said, labelling Codemasters’ latest offering, GRID, as a ‘realistic’ racing game isn’t totally fair. If anything, it’s more akin to the arcade/simulation crossover found in the highly successful Project Gotham series. The handling of the cars is nuanced and mostly quite heavy, and if they take too much damage during a race, you’ll pay for it - but then, as you make your way through the game’s early stages, you start to notice the occasional nod towards arcade-esque simplicity. The handbrake, for example, might as well have been labelled ‘THE DRIFT BUTTON’. Tap it, and you’ll drift. And while people are usually quick to point out when a game’s been ‘dumbed down’, in GRID’s case it does it no harm at all – not least because despite the concessions it makes to less-skilled gamers, it’s still pretty bloody difficult.


The game’s races are split into three regions, each with their own distinct feel. There’s American muscle cars, which tend to favour smacking your opponents about; European touring cars, which essentially make GRID the new TOCA in all but name; and Japanese tuner events which tend to focus on drifting all over the place like it’s going out of style. It’s a testament to the game’s quality that any one of these racing styles feels like it could quite easily be fleshed out into its own individual game, and while I wouldn’t go so far as to say GRID is ‘three games for the price of one’, it’s certainly a pretty generous deal.

You start the game by racing for a selection of teams in order to try and scrape some cash together. This isn’t so difficult, since most of the teams will pay you about four grand just for bothering to turn up and drive around the track three times. Once you’ve raised enough money, you can start your own team and begin to amass your own collection of cars, each one decorated with your team’s trademark colours and sponsors. The sponsors are far from being purely cosmetic, too – they’re your main source of income. Each one comes with its own requirements (i.e. “We’ll pay you £1,250 if you come 5th or higher”), and you only have a limited number of space on your car, so you’re encouraged to juggle them around to find a layout that optimises the amount of cash you’re likely to get from the next race. For example, if you’ve got a sponsor who’ll only pay up if you come out of the race with no damage to your car, you’ll probably want to swap them out for someone else before you enter a demolition derby. It’s not exactly ‘fun’, but it’s certainly nowhere near as much of a chore as it sounds.


Mini business-sim aside, the game’s main twist is the new ‘flashback’ feature. The game’s handling can be pretty unforgiving – nudge your car off the track for a split-second, and 95% of the time you’ll end up in an uncontrollable spin that sees you go from first to last in the blink of an eye. What the flashback feature does is allow you to pretend that such mishaps never actually occured - think Prince of Persia: Sands of Time, and you’re most of the way there. You hit the flashback button, rewind to a point before everything went utterly wrong, and carry on from there. You get a limited number of flashbacks, depending on your difficulty level, so someone playing on easy can afford to correct the tiniest of mistakes, while a more skilled player will have to weigh up their flashback uses far more carefully.

The curious thing about this feature – and I do mean this in a nice way, I swear – is that it doesn’t feel like the huge revolution you’d imagine it should, because it seems like such an obvious inclusion that you can’t help wondering why it hasn’t been in racing games for the last ten years already. It provides a way for dunces like me to actually play the game, while more skilled players can’t complain about it making the game too easy, since they can just turn the feature off entirely and earn more in-game cash for their trouble. It’s a classic risk-versus-reward deal, and it works.


Presentation-wise, it’s difficult to fault GRID. The visuals and sound-design are all spot-on, and the soundtrack is fairly excellent in places too. If the music that gradually fades in towards the end of a 24-hour Le Mans race (which doesn’t actually last 24 hours, before you ask, but it’s still pretty long) doesn’t give you goosebumps, you’re probably not human. Or, like me, you’ve been in last place since the beginning of the race, and so any hope of actually doing well went out the window long ago. But you get the idea.

GRID seems daunting at first, but once you get your head around the flashback feature (the game never actually tells you that you can use it whenever you like), and the fact that you’re not necessarily meant to win every race right off the bat, it starts getting a lot more fun. It’s a well-presented and entirely solid racer that provides the player with a number of different driving styles to switch between, making it easy to recommend to anyone who’s even casually interested in the genre. It’s not perfect, and it loses a couple of marks largely because it’s pretty daunting to newcomers, and there’s not much incentive to keep playing for extended periods of time if you happen to start finding the racing itself a bit lacking. But on the whole, it’s bloody brilliant.

Using the flashback feature to re-attempt a corner that previously resulted in a five-car pile-up, then tapping the brake slightly and seeing a completely different result. 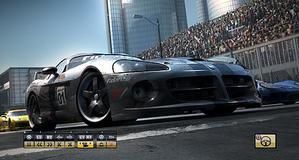 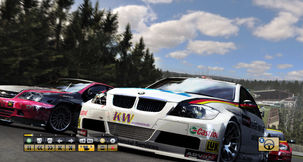 Racedriver: GRID Is Codemasters' Gift To You...