Due to poor modding support in Total War: Attila, the Seven Kingdoms Game of Thrones mod team will be moving from an RTS to first-person RPG mod for Kingdom Come: Deliverance.

Here's Everything The Total War Teams Are Currently Working On

In an effect to better keep its players up to date with the continuously expanding Total War franchise, the teams have begun a collective thread over on the Total War forums to keep players in the loop when it comes to progress with each currently relevant title.

There is a lot of DLC out there for Total War: Attila, and that has rankled the feathers of more than a few series fans. Whether or not you appreciate the upsell of additional factions, the business strategy must be working, because another pack is out today.

Sega has announced that as part of their Make War Not Love 3 promotion, the new Slavic Nations Culture Pack downloadable content pack for Total War: Attila will be given away for free on the 25th February. 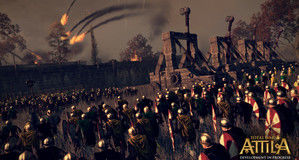