For those who own Creative Assembly's Total War: ROME II you might have noticed it's got a lot more Emperor in its diet. Today marks the launch of the Emperor Edition, which overhauls some key things.

The political system has been reworked with building chains overhauled, and an extensive campaign rebalancing. Armenia joins the playable factions in the Grand Campaign.

Most of the other changes relate to the recent Pirates & Raiders DLC, fixing problems with recruitment and unit stats.

Ardiaei of Illyria, and the Thracian tribes of Tylis and the Odrysian Kingdom make up the new Culture Pack. Each comes with their own military and naval units, as well as traits and religions.

Creative Assembly have announced a new Culture Pack for Total War: Rome II that adds the factions of Ardiaei, the Odrysian Kingdom and Tylis, which call the European Balkans their home.

This makes the first playable Thracian and Dacian factions for Rome II, but Creative are also releasing "free LC" with the Getae, another Balkan people, plus an historical battle.

Creative Assembly have released a free update before the launch of Hannibal at the Gates for Total War: Rome II. The Seasons and Wonders update adds wonders and seasons to maps and the Grand Campaign.

There's also a unit roster expansion for Carthage, and support for Twitch streaming and even touchscreen. This update includes a new major patch with fixes and balance tweaks. 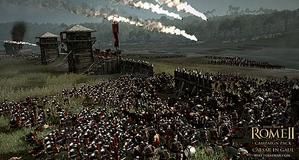