We get a hands-on with the game and talk to two of the developers! 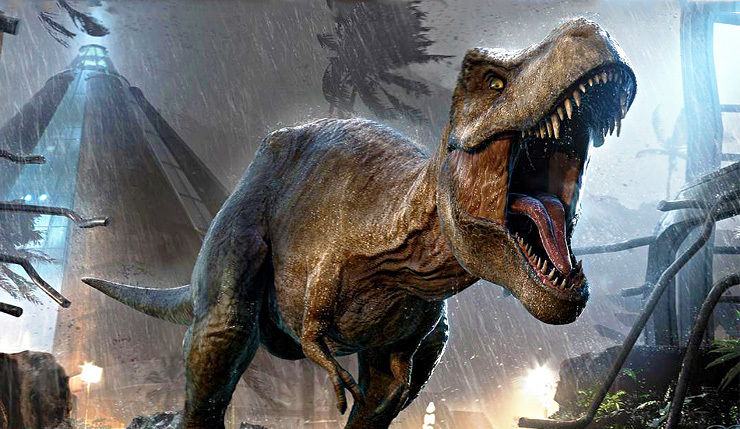 If there is a perfect studio/game idea combination, the developers behind Planet Coaster and Rollercoaster Tycoon making an official Jurassic Park management sim would be up there - and on June 12 we’re getting it.

We had a chance to play a few hours of Jurassic World: Evolution, and also have a chat about the game with Game Director Michael Brooks and Chief Creative Officer Jonny Watts. Oh, and we also asked the single stupidest question we’d ever uttered in all our years interviewing. Stay tuned for that. 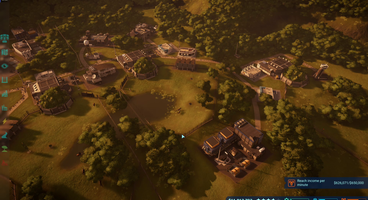 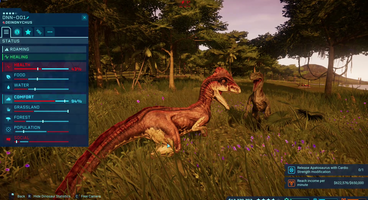 So how did it all get started? Did Frontier go to Universal or vice versa? “The short answer is that Universal approached us because of the work we did on Planet Coaster,” explained Jonny Watts, “but when that offer came in we bit their hand off! I’ve personally loved dinosaurs since I was a kid, I went to school to study zoology because of dinosaurs, I read the Jurassic Park books, watched the films… how often is it that someone asks you to make your childhood dream?”

Considering our childhood dream was getting a manage-your-own-Jurassic Park game, we can relate, and we were thrilled to play it. The first (slightly unprofessional) thing we have to relate is: wow this game looks gorgeous. It’s not immediately apparent when zoomed out, but get in close and the sheer detail on display rivals any of the movies. The texture and animation on the dinosaurs make them look completely real, and the sound design is just as detailed. A Rex roar will reverberate around the park, but get in close on a building during a storm and you can hear the rainfall hitting the metal roof. There’s even a Spanish radio station playing on the ranger jeeps, and this even gets interrupted when a storm’s closing in. 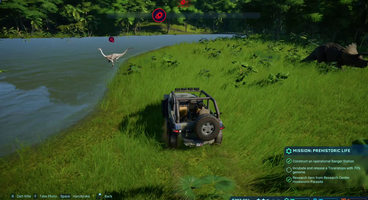 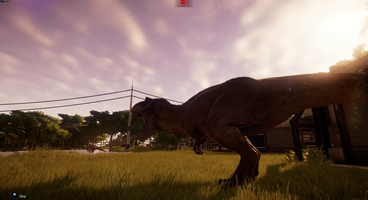 “We had access to a lot of creative people from Universal”, Jonny told us. “We’ve talked to sound designers, and something that’s really good is, we sent the animations of our dinosaurs to the film’s animators and they thought we were using their animations. That’s how good our animators are, we managed to please these really critical movie animators!” Michael Brooks added, “we kind of set ourselves the very lofty goal of having better dinosaurs than the films!” They’ve absolutely succeeded, to be honest.

Perhaps the biggest surprise for me was that, unlike pretty much any other management game ever, Jurassic World: Evolution has a story. Michael told me, “There’s very much a narrative throughout the game. I mean yes, you can create your own dinosaur park and play the management game, but we wanted to bring the spirit of the movies into that. We’ve got some key characters, but we didn’t just want them to be there supporting the management side, we wanted to add meaning to what you’re doing, and what they’re doing, in how you interact with them.” 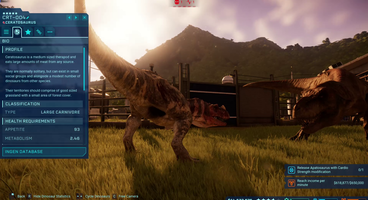 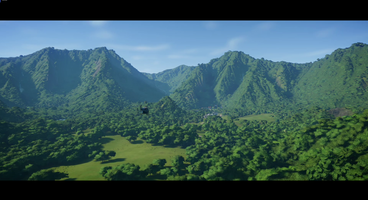 Michael says “there is definitely a conclusion” to the story part of the game, but you will be able to continue playing after that part. Jonny added, “the premise of the game is, what would you do, and what moral choices would you make, if you could clone dinosaurs. You’ve got the three division heads - Entertainment, Science and Security. Each one of those is a character, and you can see how they work together, or against each other, and may be manipulated a little by Dr Wu - they’re all good people, but they have their own insecurities and agendas.”

Speaking of Dr Wu, he’s reprised by BD Wong, who played him in Jurassic Park, World, and the upcoming Fallen Kingdom. Bryce Dallas Howard also returns as Claire Dearing, your overall boss, and the wonderful Jeff Goldblum again plays Dr Ian Malcolm to guide you through the game- “he’ll never tell you the answer,” Jonny says, “he’ll only tell you the consequences, in his own way.” One actor who isn’t returning is the very-much-in-demand Chris Pratt, despite his character Owen Grady appearing in the game (we met him after we built a ranger station). Will other famous characters from the series, like Alan Grant or Ellie Sattler, pop up? Guess we’ll find out later. 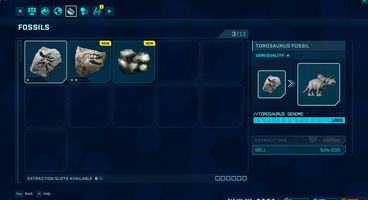 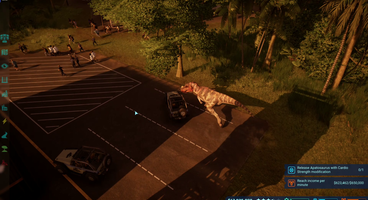 We tried out a couple of islands in the game. Isla Matanceros is the opening island and is very much a tutorial area, although it can be played straight. I could send out teams for fossils, picked up all the opening dinosaurs, built a few nice little paddocks, and had fun tranquilizing dinos and airlifting them out. We quite easily accomplished the goals set for us for all three divisions - Entertainment, Security, and Science - and the only bad thing that happened was when we “accidentally” let the man-eating Ceratosaurus out (hey, it was for science). Yes, there is a ‘visitor deaths’ score. That wasn’t in Planet Coaster.

The second island, Isla Muerta, on the other hand, starts with a massive rainstorm, the staff taking cover in bunkers, the power out, and everywhere in disarray. “Isla de la Muertas, the island of death!” Jonny happily informed me. “There’s diseases, storms, more storms…” The first island had a few diseases but I easily cured them, but Muertas took a few of my expensive dinosaurs out. “The idea is that they’re part of your progression through the story,” Michael says. “Things start off nice and calm, then you get to the second island…” 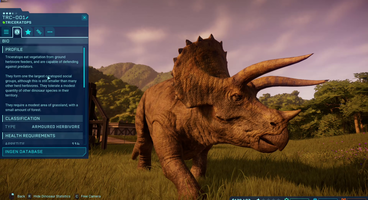 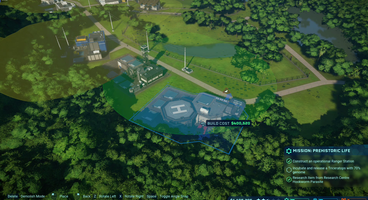 Frontier have tried hard to make all five islands feel different. “They have their own character, like different plant life and geography,” Michael explains. “Isla Pena is a good example, it’s the smallest island, and you need to bring the most dangerous dinosaurs that you can.” To earn money, we presume. “We also decided, from a more aesthetic perspective, to give each island its own time of day. Pena for example is set at night, which provides a more dramatic difference to the more tropical feel of the earlier islands.... Part of the differentiation between levels is we wanted to give players a different starting position, so it might be a blank canvas or a failed park of its own, or operations might have become a breeding centre.”

“We want to encourage players to go around their islands,” Jonny tells us. “A simple example would be, as you progress you unlock more digsites and can get an Apatosaurus, so then you can go back to the first island and put her in. The different departments might need a certain reputation to unlock a genetic slot, which may be a mission objective on another island. If you three-star an island it will unlock the next one, but you can unlock things if you four or five-star an island - like a monorail, which if you put down will mean you can generate a lot more money.” 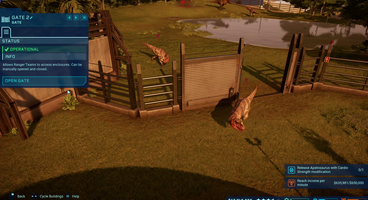 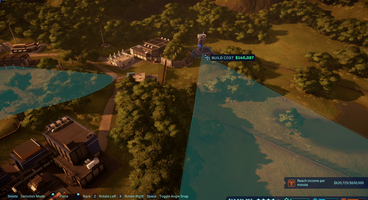 Money won’t be transferable between islands, so you can’t earn from one and use it on another, but research and unlocks will be. Michael says, “there are things you can do on earlier islands that will give you a head-start on the later ones. They are all separate, but you can do things to make your life easier as you progress. And if you really can’t progress, you can reset an island and you won’t lose all the research and progression you’ve made with the digsites. You’ll have a stronger starting point.”

Of course, Evolution isn’t the first Jurassic Park management sim. Did the team play Jurassic Park: Operation Genesis? “Yes, I played it back in the day,” tells Michael, “and also more recently to see which bits stood out. I think they were inspired by the same things we were. You see that in certain choices they made. The game has a similar process - you dig up things, you process the DNA to get more dinosaurs… but these all come from the films anyway. It’s nice that people remember it because it was a good game, but it’s nice to be doing something similar with the technology that we enjoy today.” 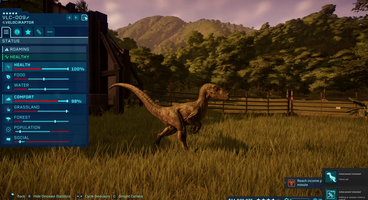 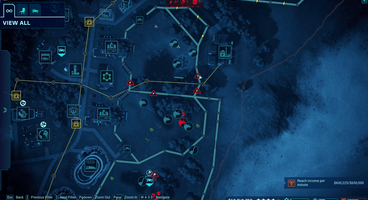 With just a week left to go before Jurassic World: Evolution releases, we can confirm the game is incredibly enjoyable to play - and somehow manages to be both straightforward to play and pretty deep. You can’t make any new rides, but you can change the price of hats in the gift shop, raise and lower the landscape, deal with power cables and generators, clear out or plant trees, stick roads everywhere, drive ranger cars or helicopters and shoot their tranq guns, upgrade and maintain fences, and even splice the dinosaurs a little to change their appearance - although nothing too license-breaking, of course. And all of this is easy to do with a gamepad, although mouse and keyboard is a little better in my opinion because it gives you a few useful keyboard shortcuts.

We are absolutely itching to get back to Jurassic World. But before we go, you know when you’ve got something that sounds great in your head, but when you say it it’s actually the dumbest thing ever?

“Have either of you been on real-life dinosaur safari trips?”

Michael and Jonny looked at each other blankly.

Sigh. I, er, meant dig sites or research. “I’ve been Universal and looked at the movie sets, props and things,” Michael says after I clarified my insanity. “And we’ve worked on zoo games before of course.: It’s one of the fun things about our games. When I was on Elite: Dangerous for example, I was very much into astronomy so I ended up doing a lot of research on the galaxy. Coming on to Jurassic World Evolution, I’ve always loved dinosaurs, and now I’ve been paid to research them and dig into what’s known about their behaviours and the way they lived! It’s pretty cool!”

Jonny adds, “it’s been a dream to work on, really.” From the slice we’ve seen, it will be to play, too.

Thanks to Michael Brooks and Jonny Watts for chatting with me, and Frontier for hosting us.. Jurassic World: Evolution is out June 12th. The new movie Jurassic World: Fallen Kingdom is out this week, June 6, in the UK and other places, but bafflingly isn’t out until June 21/22 for Australia and the US - which is when the free movie DLC for the game will drop. You can check out exclusive gameplay from our playthrough below.